Mumbai: A slowdown in its European operations dragged down Tata Steel Ltd’s overall operating margins, which in turn took a toll on its stock price. The stock fell as much as 4.03% on Thursday, before closing 3.77% lower. Given the weak outlook, analysts have not ruled out a further derating.

The double whammy of lower steel prices and higher raw material costs have been impacting steel producers. Steel prices have softened significantly in the past quarter leading to lower realizations. As a result, globally diversified firms such as Tata Steel have been hit.

Revenues from its European operations dipped by 11% year-on-year to ₹14,495 crore in the June quarter. Volume growth was lower than what the Street had pencilled in. Operational issues further dragged down performance. In fact, the European operations face headwinds from lower economic growth and uncertainty around Brexit.

Tata Steel’s Indian operations, though, held up somewhat, despite a slowdown in the domestic economy. Steel production rose 23% year-on-year to 4.5 million tonnes (mt), while sales increased 18% year-on-year to 3.96 mt. As a result, domestic revenues rose by 12.7% from a year earlier. Higher operating costs, however, saw its domestic net profit shrink marginally, though subdued economic activity and liquidity issues will weigh on domestic consumption. 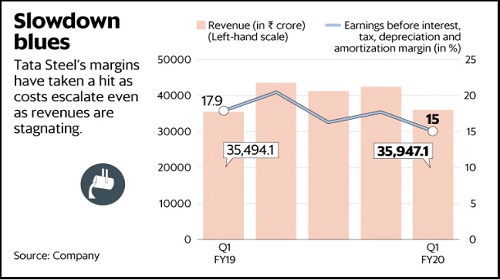 Tata Steel has cut back on its domestic expansion plans due to slowing demand. Capital expenditure plans have been cut by 20-25%. This is also to help the company keep its deleveraging plans on course.

“Tata Steel has reiterated its deleveraging plan of $1 billion in FY20 relying on cash flows from a) downward revising FY20 capex by 20-25%, b) working capital release of ₹2,000 crore, and c) potential stake sale of south east Asia business," said analysts at JM Financial Institutional Securities Ltd in a note to clients.

Still, its overleveraged balance sheet, coupled with a weak earnings outlook, could continue to weigh on the Tata Steel stock in the medium term.

Goal is to create a community of like-minded investors, says Neil Parikh of PPFAS Mutual Fund