The pair is facing resistance at 50 days simple moving average.

The pair is expected to consolidate in the range of 73.80 to 73.40 range with negative bias.

Indian rupee to open expected to  slightly left following rebound in dollar index. The forex markets were closed on Thursday on account of “Eid”. The greenback has gained following higher than expected inflation reading which market took as sign of taper tandem. A gauge of the dollar’s strength heads for its biggest weekly gain in over a month as traders await a report on retail sales which may add to evidence of a U.S. recovery.

On Wednesday, spot USDINR gained 9 paise or 0.12% to 73.43. Technical set up remains bearish as pair trades below major moving averages with lower top lower bottom formation. In near term, the pair has support at 73.20 followed by 73.05 while resistance has been shifted to 73.70 odd level.

Indian inflation eased to a three-month low in April as food costs rose more slowly. Annual retail inflation rose 4.29%, down from 5.52% in March and near the 4.20% forecast .

The IIP grew by 22.35% from a year earlier, fastest industrial output growth in the current series of the IIP, with 2011-12 as the base year. That was mainly on back of base effect as last year March it contracted by 18.67% amid nation wide lockdown. The base effect will continue to impact economic 14696. 14850. . data in the months to come.

President Joe Biden said he’s willing to compromise on his $2 trillion infrastructure proposal as he sat down Thursday with half a dozen Republican senators who’ve said they might support the legislation.

US Federal Reserve balance sheet up by $32 billion weekly pushed interest bearing assets at the Fed to $7.78 trillion, up 22.8% on an annualized three-month basis and 89% from mid-March of last year. 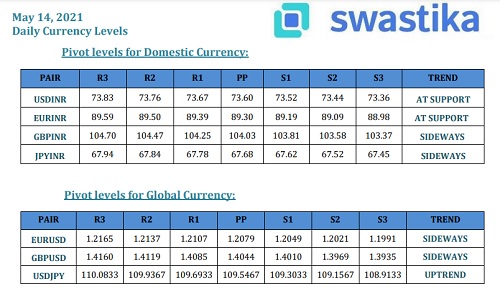 USDINR (27 may) is moving near at it’s support of the descending trendline and it is near retesting level from this level it may move bounce back to upside. However, it’s upside move is capping via 50 days SMA’s. So, based on these analysis we can see sideways move in the EURINR for the day.

* Sideways move can be seen in currency for the day.

* GBPUSD Price May Pull Back Towards $1.40 Before Bearish Trend Continues

The average of household spending in Japan was up 6.2 percent on year in March, coming in at 309,800 yen.

GBP remained supported after UK economy, gearing up for recovery, grows more than expected in March

The BoE also said last week it expected economy would recover quickly as coronavirus restrictions are lifted to grow by 7.25% in 2021 as a whole.

The European Commission revised upwards its GDP forecasts for 2021 and 2022, saying the growth will be driven by private consumption and investment

The French economy will return to its pre-COVID 19 levels of economic activity by the first half of 2022, said French Finance Minister Bruno Le Maire

Exclusive: TSMC looks to double down on U.S. chip factories as talks in Europe falter

Jio comes up with special initiatives for JioPhone users amid pandemic