* Rupee weakened as global markets were rocked overnight by a surge in U.S. treasury yields to their highest levels since the pandemic began. 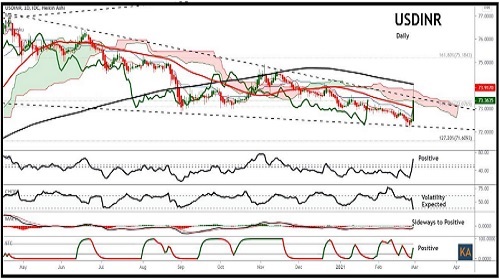 * Euro appreciated due to weakness in Rupee and helped by stronger-than-expected consumer sentiment and GDP data from Germany.

* Investors have been also upbeat about lockdowns ending and economies re-opening, while concerns about COVID-19 vaccination delivery delays mounted. 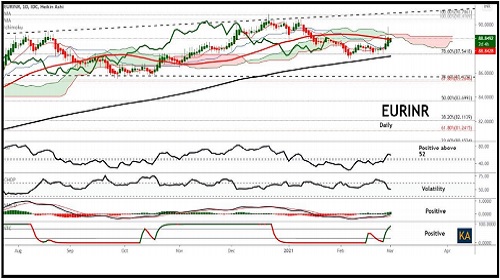 GBP appreciated due to weakness in Rupee after pressure seen as dollar recovers after yields on 10-year U.S. Treasuries jumped as high as 1.6%

The British government is preparing for a gradual reopening of the economy after several months of lockdowns, which heralds the gradual economic recovery.

The British government has ramped up the distribution of vaccines in the country, and many agencies confirmed Britain's superiority over many other countries in this matter. 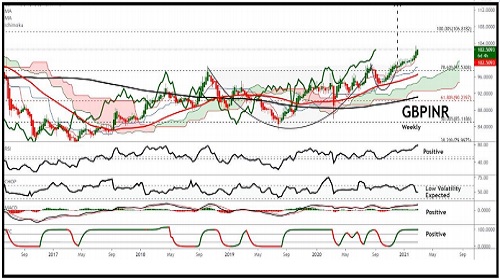 * JPY gained tracking weakness in Rupee after prices dropped even amid a sell-off in stocks, as the surge in yields fomented inflation worries.

* Industrial output in Japan was up a seasonally adjusted 4.2 percent on month in January

* The value of retail sales in Japan was down a seasonally adjusted 0.5 percent on month in January, coming in at 12.097 trillion yen 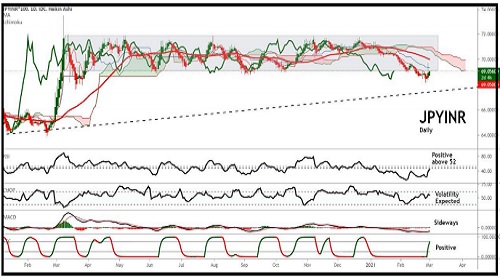 The USDINR bulls have taken a breather after Yellen`s remarks By Rahul Gupta, Emkay Global

The hopes of further stimulus under the Biden`s administration By Rahul Gupta, Emkay Global

The volatility in FX will increase as there is an event risk ahead of budget and RBI policy By Rahul Gupta, Emkay Global

The USDINR spot is not breaking the narrow range of 72.75-73.20 By Rahul Gupta, Emkay Global

USDINR Spot hit a low of 72.70 which is the crucial support zone By Rahul Gupta, Emkay Global

Equities are charged on `risk-on` tone as countries By Rahul Gupta, Emkay Global

Local equities have seen healthy inflows since the announcement of the budget By Sugandha Sachdeva, Religare Broking

The Indian rupee has been gradually inching lower By Sugandha Sachdeva, Religare Broking

Seamec gains on the bourses

Wonderla Holidays jumps on the BSE