SBI Life Insurance Co. Ltd’s investors would be a happy lot given that the largest private sector insurer has managed to deliver both growth and profitability in the third quarter (Q3).

The insurer’s new business grew 20% on an annualized premium equivalent (APE) basis, which means the company is on track to achieve its 20% growth forecast for FY19.

Indeed, data from the insurance regulator had shown that SBI Life’s business growth had picked up in December, second only to HDFC Life Insurance Co. Ltd.

The boost during the third quarter drove up the APE growth for the nine months ended December to 13%.

What’s more comforting is that the growth is led by margin-friendly protection plans. The share of protection in new business more than doubled to 11% in the overall portfolio from 5% a year ago. Since protection plans are the most difficult to sell, the strong growth here indicates SBI Life has managed to crack the code.

The branches of its parent, State Bank of India (SBI), sold the maximum number of protection plans contributing to the growth. This shows SBI Life has managed to use its biggest strength in distribution to the best possible use. 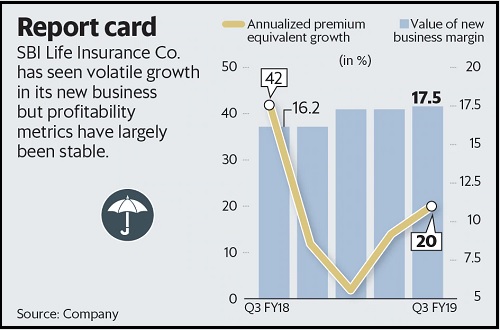 The largest life insurer has not only managed to grow, but has increased its most profitable business.

SBI Life’s products are not just flying off the shelves, the insurer’s customers are sticking to it as well. Persistency ratios improved across tenures barring that of the 61st month with the 13th month increasing to 83.3% from 81.5% a year ago.

During the nine months ended December, the insurer also managed to improve its cost ratios as efficiencies increased. In short, it has finally used its parent optimally to grow its business.

“SBI Life’s retail business franchise is the geographically most well diversified among its private peers, adding greater immunity to capital market downturns. The contribution of the top three states in its total retail business stands at only 26%, versus 42% for ICICI Prudential Life and 54% for HDFC Life," analysts at Jefferies India Pvt. Ltd said in a note.

That said, market-linked plans still form 53% of its total portfolio and unit-linked plans (Ulips) grew by 19% year-on-year. This means that despite the volatility in equity markets during the third quarter, customers have opted for Ulips.

The SBI Life stock has recovered most of the losses after the Infrastructure Leasing and Financial Services Ltd crisis, and the Q3 performance should come as an affirmation of investors’ faith. Even with the rise, analysts believe the stock is reasonably valued at the current levels. It trades at a multiple of twice the estimated embedded value for FY20.

Facing multiple headwinds, InterGlobe`s shares are down 31% from highs

Tata Coffee up over 5% on doubling of net profit