Markets drifted lower and lost over one and a half percent, taking a breather after the recent surge. Participants were in the profit-taking mood from the beginning, citing overbought markets and a cautious approach ahead of derivatives expiry. Consequently, the Nifty index ended near day’s low at 12,858 levels, down by 1.5%. In line with the benchmark, the broader indices too witnessed a decline wherein midcap lost 1.8% and smallcap ended with a cut of 1.1%.

Among the sectoral indices, Banks, Auto and Healthcare were the top losers. It’s normal to see an intermediate dip in a trend and we may see further profit-taking ahead. Besides, volatility is also likely to remain high due to scheduled derivatives expiry. Nifty has the next crucial support at 12,700. Considering the scenario, we suggest limiting naked leveraged trades and preferring hedged positions. 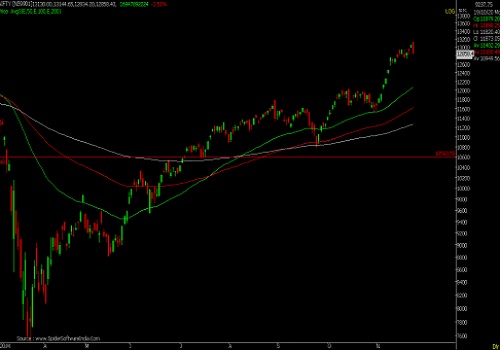 * Alembic Pharmaceuticals announced that its joint venture Aleor Dermaceuticals Ltd has received tentative approval from the USFDA for its Abbreviated New Drug Application for Testosterone Gel.

* L&T Construction, the construction arm of L&T, has secured a large contract to construct India's longest road bridge across river Brahmaputra connecting Dhubri in Assam to Phulbari in Meghalaya.

* Lupin announced that it has launched generic immunosuppressant Tacrolimus capsules in the strengths of 0.5 mg, 1 mg, and 5 mg, in the American market.

SRTRANSFIN FUT added around 12% in open interest addition as LONG buildup was seen in it in till closing time. Current chart pattern also indicates further up move in its price. We suggest buying SRTRANSFIN as per below levels.

* Bata India reported better number sequentially but remain muted as compared to Q2FY20 due to pandemic. Its revenue stood at Rs 368 cr which grew by 172% QoQ. Its EBITDA reported profit of Rs 18 cr as compared to EBITDA loss of Rs 86 cr QoQ. On bottom-line its loss narrowed down to Rs 44 cr as compared to loss of Rs 101 cr in Q1FY21. Going forward, management expects improvement but at a very gradual pace which means FY22E onwards we would see decent growth. Maintain Buy.

* Over the years Bata has been a consistent performer, however, Q1FY21 was severely impacted due to lockdown led by Covid-19. Further in Q2FY21 with opening of economy sales is picking up at gradual pace but as the situation is still uncertain we expect FY21 growth to remain muted.

* Nonetheless, we expect the company to regain in FY22E as the situation stabilises and demand would pick-up on the back of better product mix, increasing presence in e-commerce space and growing distribution network by expanding in semi-rural market and aggressively promoting brands through advertisements. Besides, it has healthy balance sheet and strong cash flows which is an added advantage and this would aid to sustain in tough times. Hence, we have maintained a Buy on the stock with target price of Rs. 1,669.