The U.S. Federal Reserve is scheduled to hold a two-day policy meeting next week - GEPL Capital

* The euro strengthened to its highest in nearly two years against the dollar, while commodity currencies gained as risk-on moves continue in the wake of a fiscal stimulus deal reached by European Union leaders on Tuesday.

* Currency traders largely shrugged off U.S.-China tensions, although risk appetite in currency markets briefly diminished for about two hours, after the United States told China to close its consulate in Houston amid spying accusations, the latest example of worsening relations between the two countries. mood remained largely optimistic, however, following the EU's agreement on a 750 billion-euro recovery fund to share the debts incurred during the coronavirus crisis, with the euro up for a fourth straight day against the greenback. is part of global reflation and maybe the multiyear bull market in the dollar has come to an end

* The U.S. Federal Reserve is scheduled to hold a two-day policy meeting next week, in which it is expected to keep interest rates near zero as it seeks to support an economy battered by coronavirus lockdowns.

* The United States reported more than 1,000 deaths from COVID-19 on Tuesday, according to a Reuters tally, the first time since June 10 the nation has surpassed that milestone. California was close to passing New York in total infections.

* A flare-up of coronavirus cases and the reintroduction of lockdown measures in Australia's secondlargest state had little impact on the currency, even after reports that the latest virus outbreak will cut the country's third-quarter GDP growth by 0.75 percentage point.

Chart of the day 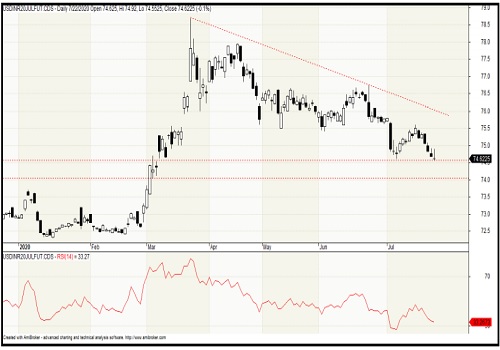 This week dollar bulls have been very active by Rahul Gupta, Emkay Global

After a sharp fall in the USDINR spot by Rahul Gupta, Emkay Global

The sharp fall in USDINR spot has been very unexpected and traders are in shock - Mr. Rahul Gupta, Emkay Global

The range bond movement in USDINR has continued even this week by Rahul Gupta, Emkay Global

This week the fall in dollar index and positive stock indices by Rahul Gupta, Emkay Global

This USDINR pair needs a trigger to decide the trend by Rahul Gupta, Emkay Global

Diesel prices down 19-21 paise across metros

The market movements remained subdued for the most part of the week By Dr. Joseph Thomas,Emkay Wealth