* Following an initial rise to a one week high , Jeera October futures slipped to end the session marginally down on Friday. Good domestic and export demand lend support, however, higher arrivals and expectations on on-time sowing weighed on, keeping gains under check.

* As per Andhra Pradesh Govt, Turmeric sowing as on 11th September 2019 reported 10,345 hectares (from normal area) as compared to 17,640 hectares in the correspond-ing period last year.

* As per Telangana Govt, Turmeric sowing as on 04th September 2019 reported 48,315 hectares as compared to 47,790 hectares in the corresponding period last year.

* Cardamom October futures on MCX ended down on Friday.

* The current season arrivals, which officially began on Aug 1, till Sep 14 were reported-ly around 888 tonnes and sales at 842 tonnes. 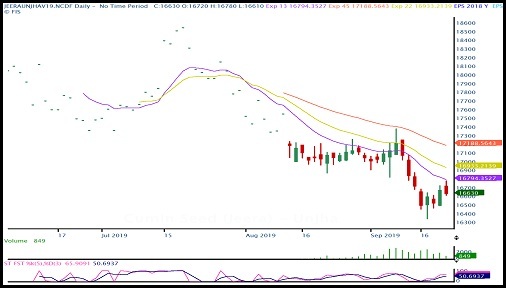 * Oct. RMseed prices on NCDEX extended correction due to subdued demand from oil millers at higher price levels along with expectation of rise in mustard seed acreage in upcoming rabi sowing season.

* Total production of oilseeds in the country is 31.4 mln tn annually including groundnut, sesamum, soybean, sun-flower, and mustard. Acreage of soybean was up marginally by 0.7% to 11.35 mln ha so far from 11.26 mln ha in the year-ago period.

* Mills in India crushed 575,000 tn of mustard seed in August, up by 15% higher compared to previous month, ac-cording to Mustard Oil Producers Association of India. Higher crushing is due to improved export demand from South Korea.

* Malaysia's palm oil exports during the Sept. 1-10 period are estimated to have fallen 23.2% on month at 393,129 metric tons, cargo surveyor AmSpec Agri Malaysia.

* In July, imports of crude palm oil rose 47% on year to 532,784 tn, according to the Solvent Extractors' Association of India. 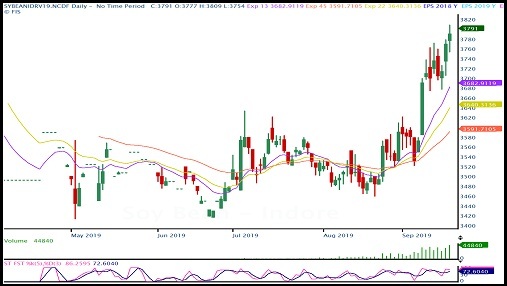 * Vietnam cotton imports from India declined 86% on year to 1,870 tn in August as demand from the textile industry has slowed down.

* Cotton Corp of India will not give in to pressure from textile cartels to sell its stocks at a cheaper rate, as the quality of cotton is far superior. According to CPI.

* The US Department of Agriculture has scaled down its estimate for average global cotton price in 2019-20 (Aug-Jul) for the fourth consecutive month due to lower demand from major consuming countries, which would lead to a rise in ending stocks for the year. For 2019-20, global cotton production is now seen at 124.9 mln bales (1 US bale = 218 kg), against the forecast of 125.6 mln bales in August, as crop in the US and Australia is expected to be slightly smaller.Globally, con-sumption is now estimated to decline to 121.7 mln bales, against the previous forecast of 123.1 mln bales, leading to rise in global ending stock at 83.8 mln bales, compared with 82.5 mln bales esti-mated a month ago.

* The report also forecast that overall cotton imports to Vietnam may dip further in August. The US Department of Agriculture has further cut its forecast for average global cotton prices in 2019-20 (Aug-Jul) by 3 cents from previous month to 60 cents per pound noting lower demand from major consuming countries, which may lead to increase in ending stocks for the year.

* UK-based Cotton Outlook has maintained its estimate for India's 2019-20 (Aug-Jul) production at 6.13 mln tn, which would be 7% higher on year, and has downward revised its projection for the global crop falling by 51,000 tn to 26.68 mln tn, due to a fall in production in Brazil and Uzbeki-stan. However, the production estimate is seen higher by 52,000 tn to 4.9 mln tn in the US. The agency has also lowered its 2019-20 global cotton consumption view to 25.7 mln tn from 25.9 mln tn seen in the previous month. 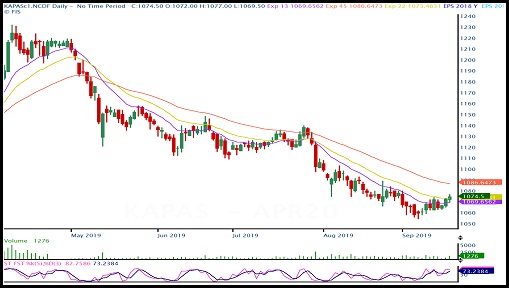 * Chickpea & dry edible bean harvest in US has started and around 12% is said to be complete now as per NASS updates. It was 6% last week ending 13th Sep-2019. Idaho completes 37% of the crop is now in the bin, versus 65% last year, while Montana has harvested 58%, down from 76% last year and Oregon reports 45% harvested, compared to 75% last year. In North Dakota only 13% harvest is said to be complete against 72% last year till date. In other states it is in initial stages.

* The National Commodity Clearing Ltd, the clearing arm of the National Commodity and Derivatives Exchange, on Wednesday marked 1,180 tn chana under the staggered deliv-ery mechanism against the September contract, which expires on Friday, according to data available on the website. 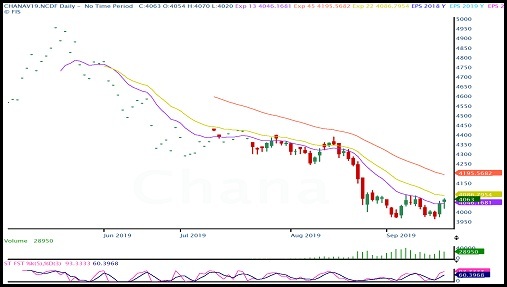