* Consumption stocks have remained sideways in the recent market consolidation. Stocks like United Spirits remained significantly immune to the market volatility and was largely range bound. However, we believe it has absorbed most of the negative news during lockdown. The stock witnessed buying interest at every decline and was able to hold | 570 levels on multiple occasions. We believe United Spirits is likely to move further higher in coming weeks on the back of short covering

* From the options space, after significant writing seen in July 600 Call strikes, the highest Call OI base is at 600 strike for August series as well. However, continued writing is visible at ATM Put strikes of 580 and 570 strikes. With initial sign of closure among Call writers, we expect positive momentum to kick in

* The stock saw significantly high delivery based buying on May 14 when it moved from | 500 to | 560 levels. After a round of consolidation around these levels, we believe the stock is finally moving into a higher trajectory. Moreover, promoters have bought some stake around | 590 levels in January 2020. Hence, the stock is likely to continue its upward move amid consolidation

* Mean-1*sigma levels for United Spirits has acted as strong reversal levels in the past. After testing these levels in the recent market volatility, the stock has shown a sharp reversal and is currently trading near its long term mean levels. We believe positive bias in the stock should be maintained till it is above its mean-1*sigma placed near | 520 levels 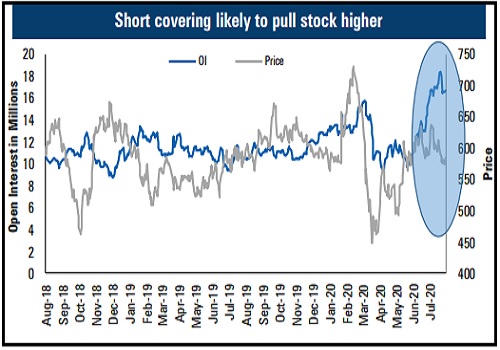