* Despite a sharp rise in the Nifty, the Bank Nifty relatively underperformed. However, this week participation was seen in private banks whereas supportive action was also seen in PSU banks

* As news came in that the Finance ministry has proposed that better performing PSU banks be given Maharatna and Navratna status, aggressive short covering was seen in PSU banks. The leader among the pack, SBI, finally managed to move above | 200 with a rise in volumes

* Since the past three expiries, SBI had the highest Call base at | 200, which was acting as a hurdle. For the August series as well, the highest Call base is placed at | 200. However, post the announcement, almost 1200 contracts saw closure in 200 strike Call. The stock has managed to move above this level whereas the Call OI position shifted to the 220 strike

* Long OI block was seen in the stock near | 192 levels post which it accumulated for a few days. We feel the stock is well placed to move towards its sizeable Call base of | 220. Hence, we recommend forming a Covered Call strategy at current levels 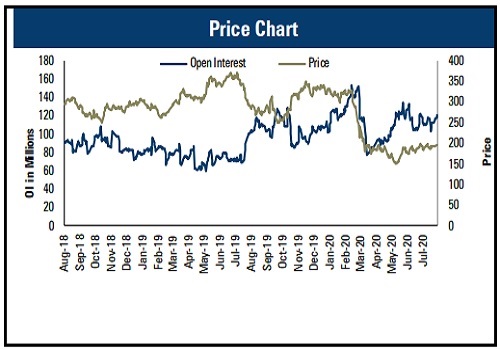