* The expectations are built in for phase one trade deal between US and China. The continued resilience shown by Chinese Yuan is agood indicator of this which may lead to control any sharp depreciation in emerging currencies to some extent.

* Despite Dollar index remaining in a tight range, USDINR is depreciating for the last couple of sessions. This may be due to surge in crude oil prices. So far FIIs have invested close to 19,000 cr. in equity market in last couple of months however their buying in Debt market is still missing. With the operation twist started by RBI, the intention of RBI is made clear of keeping the yields lower. This means the intermediate jitters due to any slippage in fiscal deficit, higher inflation and surge in global yields can be compensated by this tool of RBI.

* RBI is seen to support USDINR whenever intermediate declines were seen in the currency pair. This was done to support exporters by not allowing Rupee to appreciate beyond a point. This may keep the USDINR downsides limited and it may be bought on declines in the short-term. However move beyond the stiff resistance of 72.6 has to be seen.

* The continuously rising forex reserves has been on account of rising FII inflows and also due to RBI buying Dollar at lower levels.We have seen such action near 71 before the recent depreciation started. This means major support for USDINR is at 71.0 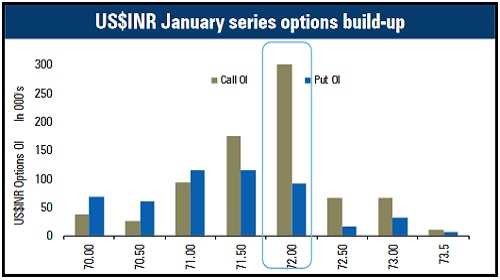 Euro needs to breach key hurdle of 1.12 to strengthen against US$...

* Europe has decided to give stimulus of $ 22 bn per month which could have led to some weakness in EURINR. However recently we have seen surge in this currency pair on account of some uncertainty waning out from Brexit front after the high majority appointment of Boris Johnson.

* The volatility may be seen in this currency as it approaches towards the Brexit date of January 31. On this day, at London time of 11 PM, Brexit will happen. But that doesn’t mean any change for business and citizens. However UK will lose voting power in Brussels. There is a transition period of almost 11 months for final trade deal to sign between UK and Europe. 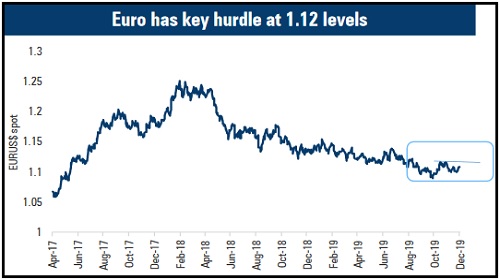 Buying is likely to be seen in JPYINR

* Japanese Yen is expected to remain resilient as money into safe assets may bring in flows into JPY. We have primarily seen government yields, JPY, Dollar and Gold being used as safe heaven assets.

* The country has continued with the stimulus program, infact $ 120 bn of extra stimulus is expected to be given which had kept the currency subdued. However if the Middle East crisis is not solved, we may witness buying into this currency pair defying the weakness trend. Iraq parliament recommended US troops to move out of country and Iran has said it would abandon limit on uranium enrichment thus keeping the risk-off sentiment. 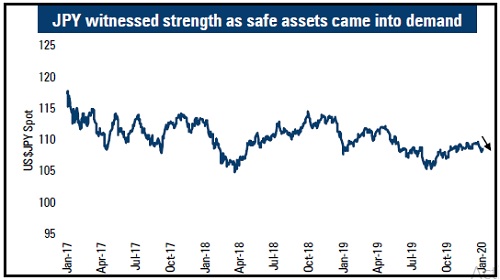 * The UK inflation is much below the target of 2.0%. However the growth has remained subdued near 2.1%. Though status quo is expected from Bank of England meeting, a rate cut cannot be ruled out considering Brexit negotiations.

* CFTC data shows some addition to net long positions. The currency pair has already moved up and could witness some volatility on account of higher open interest as it approaches the Brexit date of Jan 31. 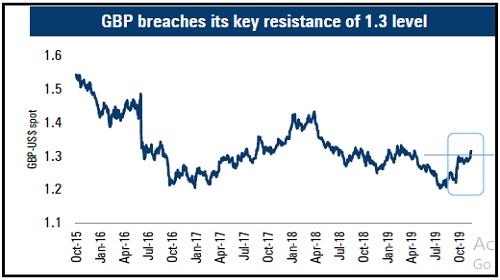 Views express by all participants area for information & acadamic purpose only. Kindly read disclaimer before refering below views.

Rupee ended at 71.55 a dollar on Tuesday, down 26 paise against its previous close of 71.29 - Geojit Financial

Vicky Kaushal: Ayushmann Khurrana and I are connected somewhere

FIIS Stood as net buyers in equities as per february 20 data:NSDL