Dismal volume growth was a key disappointment in UltraTech Cement Ltd’s September quarter earnings. Given the seasonal weakness, analysts were anticipating only a modest growth of 2-3% in sales volumes. But the company missed these low estimates as well.

At 17.77 million tonnes, its cement sales volumes fell by 2% on a year-on-year basis, mainly impacted by the heavy and extended monsoon. ACC Ltd and Ambuja Cements Ltd too saw their sales volumes decline in the September quarter. However, an exception to this trend among large-cap cement makers was Shree Cement Ltd, whose volumes registered an increase.

Although UltraTech Cement’s consolidated net profit increased more than 60% year-on-year to ₹579 crore, it missed the ₹716.7 crore consensus estimate of analysts polled by Bloomberg. Considering the ongoing seasonal price correction across the country, as anticipated, the firm’s realizations declined sequentially, but grew annually. Its consolidated revenue growth on a year-on-year basis was also aided by higher sale of premium products. According to the company’s investor presentation, premium products contributed 10% to trade sales volume. 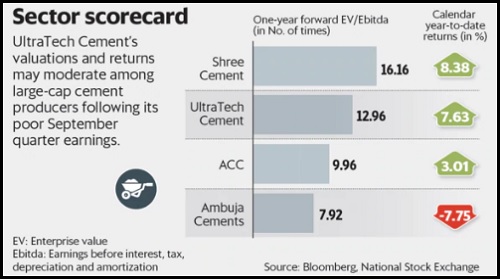 On the cost front, even though prices of raw materials and freight eased, low utilization levels, along with higher other expenses, pushed UltraTech Cement’s operating cost per tonne higher. Annual maintenance undertaken during the quarter resulted in variable costs increasing 3% compared to the previous quarter, the company said in a press release. The number of kilns shut down in the September quarter were 14 versus 10 in the June quarter, according to its investor presentation.

In short, the fact that even a market leader like UltraTech Cement isn’t immune to demand slump won’t go down well with investors. Poor earnings coupled with dim hopes of an instant demand revival, would weigh on the near-term stock performance and valuations. At a one-year forward EV/Ebitda of 13 times, UltraTech Cement is the second-most expensive Indian cement stock. EV stands for enterprise value, and Ebitda is earnings before interest, taxes, depreciation and amortization.

Meanwhile, so far this calendar year, the stock has given returns of around 8%. Most of its peers have posted more or less similar returns. Analysts say apart from improvement in demand, meaningful upside in the stock would also depend on balance-sheet deleveraging.

It is already known that UltraTech Cement has been very aggressive on acquisitions in the recent past, keeping its debt elevated. However, the company has said that it is in the process of selling its non-core assets acquired in China and the United Arab Emirates. Sale proceeds will be used to deleverage the balance sheet. Post the Century Cement merger, the company’s net debt/Ebitda ratio stood at 2 times at the end of the September quarter. UltraTech Cement targets to bring it down to less than 2 times by March 2020, according to its investor presentation.

Telcos` stocks rise ahead of AGR hearing, Vodafone Idea up 7%