* The Nifty has entered into some consolidation after a sharp move was seen in the last few weeks. The index is likely to consolidate around 11000. The highest Put base for this series is placed at 11000 strike followed by 10800 strike. Thus, positional support remains at 10800 if any divergence is increased below 11000 in the current consolidation

* The highest Call base is placed at 11500 strike followed by 11300 strike. Volatility has still remained low near 24.50 levels, which means positive consolidation is expected in the index. We expect more stock specific moves to attract market participants amid range bound market movement. Stocks from IT, pharma, FMCG have shown promise of giving higher returns in the coming days

* Downsides in the banking space seem limited as this space has already remained subdued. We may see stock specific reversals from this space. We have seen green shoots of some performance coming back in the PSU banking segment

* The underperforming midcap stocks can start performing in this positive consolidation. Various spaces like capital goods, infrastructure and auto ancillary have a good number of stocks, which have still enough room for participation. We can witness good short covering in these stocks 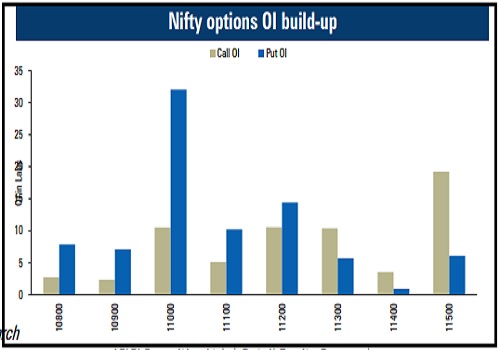 * The Bank Nifty managed to move towards its highest Call base of 23000 but witnessed some profit booking and ended the series marginally lower. Stock specific actions continued where most private banks supported from the bottom

* After the quarterly numbers of SBI, PSU banks saw short covering and rallied almost 5%. The August series started with premium along with higher OI base indicating long rollover for August series. We feel this will continue to provide support to the Bank Nifty, which is likely to move towards 23000

* The Dollar index has fallen and moved towards its two years low on the back of new stimulus news. However, the same move was absent in the rupee, which failed to appreciate. We feel a leg of appreciation is due in the rupee. If that happens in coming days then a sharp move in banking stock could be seen

* For the coming week, sizeable Call OI is placed at 22000 strike. A close above this level could trigger a 1000-point move on upsides and take the index towards 23000. However, for a fourth week in a row, additions were seen in 21500 and 21000 strike Puts indicating major support 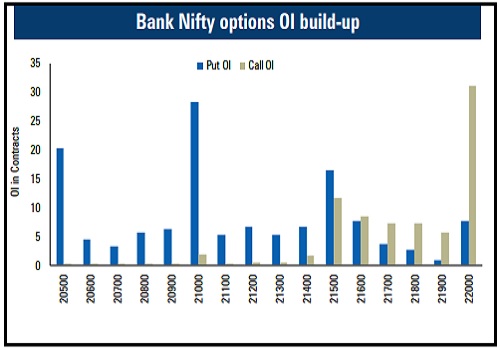