* Equity benchmarks started monthly expiry week on a negative note tracking weak global cues. The Nifty ended the session at 14676, down 306 points or 2%. The market breadth stayed negative with A/D ratio of 1:2.5. Sectorally, barring metal, all other indices ended in red weighed by auto, pharma, financials.

* The daily price action formed a sizable bear candle while maintaining a lower high-low, indicating extended correction after 13% post Budget rally. In the process, the index almost approached near our target of 14600 after retracing 38% of the February rally (13597-15432), at 14730

* Going ahead, we believe extended correction from here on would offer an incremental buying opportunity as we do not expect the index to breach the key support threshold of 14300. Hence, any dip from here on should not be construed as negative. Instead it should be capitalised on to accumulate quality large cap stocks in a staggered manner. Meanwhile 14900 would act as immediate resistance as it is 38% retracement of ongoing corrective phase. Our constructive bias on the market is based on following observations:

* a) since May 2020, the index has not sustained below its 50 days EMA. That subsequently offered a fresh entry opportunity. Currently, the 50 days EMA is placed at 14320

* c) Time wise, secondary correction has not lasted for more than a week, since May 2020

* We expect the index to maintain the rhythm of aforementioned price and time wise correction. The ongoing healthy retracement would make market healthy from a larger term perspective and pave the way for the next leg of up move in coming weeks. In the process, the relative outperformance of the broader market would endure

In the coming session, we expect bias to remain corrective as long as index maintains lower high-low formation, as the intraday pullback remained short lived over past couple of sessions. Hence, use intraday pullback towards 14790-14817 to create short position for target of 14706. 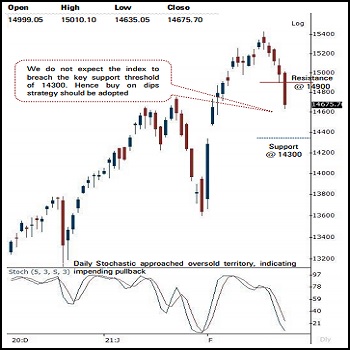 * The Nifty Bank declined for the fifth consecutive session and closed sharply lower by more than 1 . 5 % on Monday on back of soft global cues . The decline was broad based as 10 out of the 12 index constituents closed in the red . Bank Nifty index closed at 35257 down by 584 points or 1 . 6 %

* The daily price action formed a bear candle with a lower high - low signalling continuation of the breather for the fifth consecutive sessions after the recent strong rally .

* The overall structure in the index remain positive as forming higher peak and trough in the long term chart . Empirically, secondary corrections have been integral part of the major bull trend . Hence, we believe buy on dips in quality banking stocks would be the prudent strategy to adopt going forward

* In the coming session, the index is likely to open on a positive note . However, bias remain corrective as forming lower high - low in daily chart . Hence we expect selling pressure in pullback pullback towards 35560 -35620 for creating intraday short positions in Bank Nifty February Futures for target of 35340 meanwhile stop loss is placed at 35720 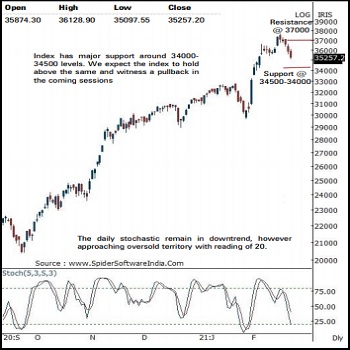 Nifty plunged more than 3% in the week gone by, while in for the month of February - HDFC Securities