Technically, Spot USDINR is having support in the range of 70.70 to 70.50 while resistance around 72. USDINR October options distribution indicating resistance between 72-72.50, the levels were call writing seen, and support at 70.50.

India’s forex reserve for the week ending October 11, touched all time high of $439.712 billion up by $1.879 billion from previous week. Foreign currency assets (FCA), which form a key component of reserves, rose by $2.26 billion to $407.88 billion. This could be partially because of revaluation of euro and pound which rallied in last couple of weeks. FCAs are maintained in major currencies like the US dollar, euro, pound sterling and Japanese yen.

On broader term, dollar ended week with loss amid news of partial deal between US-China and Brexit. Among the major currencies, pound was the biggest gainer, up by 2.49% to $1.298. However, the trend will be decided by the critical parliamentary vote on U.K. Prime Minister’s Boris Johnson’s Brexit deal.

The European Central Bank announces its monetary policy decision and President Mario Draghi gives his last rate-decision news conference before his departure at the end of the month to make way for Christine Lagarde.

USDINR October futures is having support in the range of 71 to 70.50 and resistance at 72.

Short covering bounce can be seen from the 70.70 odd levels. 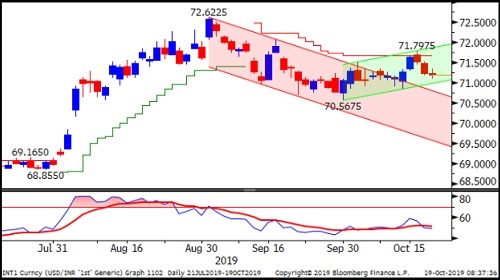 Short term traders should hold the long position with trail stop loss of 79. 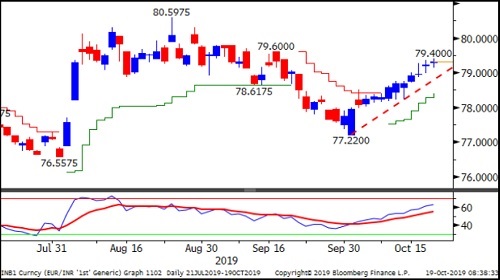 GBPINR October futures vindicating our bullish view in the week gone and crossed the crucial resistance level of 92.50 but closed below 92.

We remain cautious from here ahead of even and advised to cover long position and wait for the dust to settle down. 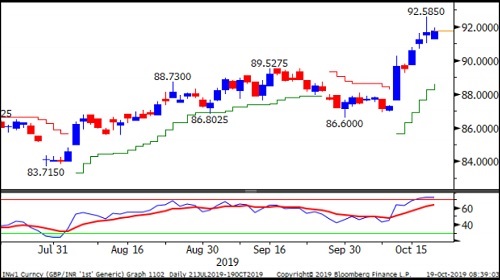 JPYINR October futures is having support at 65, the trend line adjoining low of September 13 and 30. The pair has been trading below short term moving averages.

Short term bias for the pair will turn negative below 65 and can go towards low of July i.e. 63.35. 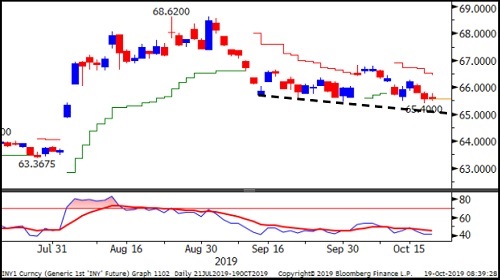