* Indian rupee recovers from two month lows on back of profit booking and central bank intervention. On Thursday, rupee touched low of 72.25 before closing at 71.97 a dollar. From the economic data front, there were huge divergence between retail and producer price index indicating slower demand at wholesale level while rise in food prices remain concern amid unseasonal rainfall.

* Technically, Spot USDINR may continue profit booking in today’s session as well with downside support of 71.70 and resistance at 72.25.

* Government will release the trade data for October month which will show further widening of deficit to $11.92b from previous $10.86bn.

* The yen weakened against all its Group-of-10 peers after White House economic adviser Larry Kudlow said the U.S. and China were close to finalizing the first phase of a trade deal. Commodity currencies rose.

* Federal Reserve Chairman Jerome Powell, speaking before the U.S. House Budget Committee, said he sees no current sign of a slowing economy. However, he added that the U.S.-China trade deal along with sluggish global growth has put strain on business investment. 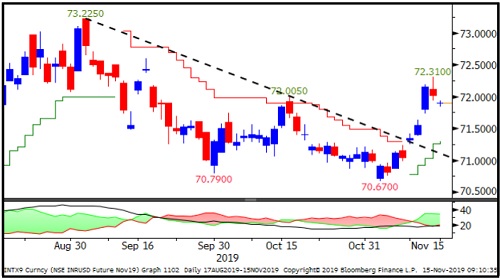