The world's five largest oil companies collectively cut the value of their assets by nearly $50 billion in the second quarter, and slashed production rates as the coronavirus pandemic caused a drastic fall in fuel prices and demand.

The dramatic reductions in asset valuations and decline in output show the depth of the pain in the second quarter. Fuel demand at one point was down by more than 30% worldwide, and still remains below pre-pandemic levels.

Several executives said they took massive writedowns because they expect demand to remain impaired for several more quarters as people travel less and use less fuel due to the ongoing global pandemic that has killed more than 700,000 people. 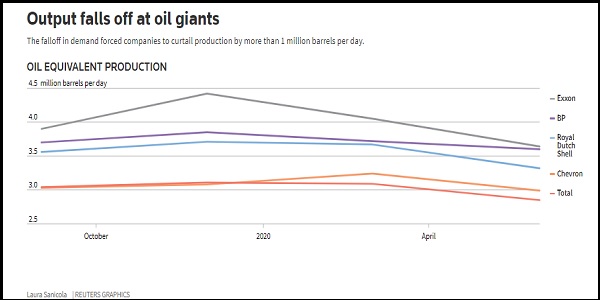 Of those five companies, only Exxon Mobil did not book sizeable impairments. But an ongoing re-evaluation of its plans could lead to a "significant portion" of its assets being impaired, it reported, and signal the elimination of 20% or 4.4 billion barrels of its oil and gas reserves.

By contrast, BP took a $17 billion hit. It said it plans to re-center its spending in coming years around renewables and less on oil and natural gas.

Weak demand means oil producers must revisit business plans, said Lee Maginniss, managing director at consultants Alarez & Marsal. He said the goal should be to pump only what generates cash in excess of overhead costs.

"It's low-cost production mode through the end of 2021 for sure, and to 2022 to the extent there are new development plans being contemplated," Maginniss said.

London-based BP has previously said it plans to cut its overall output by roughly 1 million barrels of oil equivalent (boepd) by the end of 2030 from its current 3.6 million boepd. 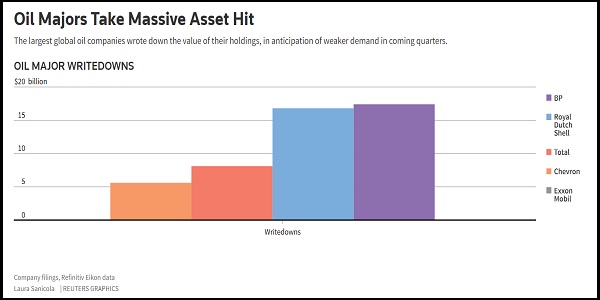 Of the five, Exxon is the largest producer, with daily output of 3.64 million boepd, but its production dropped 408,000 boepd between the first and second quarters. The five majors, which include Chevron Corp , Royal Dutch Shell  and Total SA , also cut capital expenditures by a combined $25 billion between the quarters.

Crude output worldwide dropped sharply after the market crashed in April. The Organization of the Petroleum Exporting Countries, led by Saudi Arabia, along with allies including Russia, agreed to cut output by nearly 10 million barrels a day to balance out supply and demand in the market. 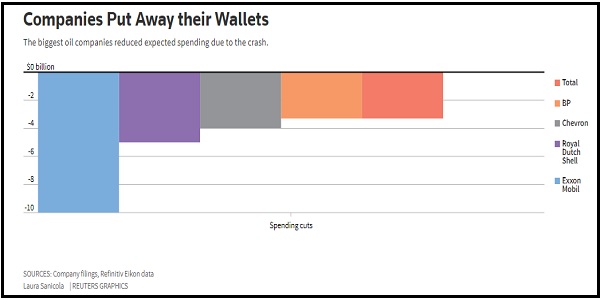 (Reporting by David Gaffen and Gary McWilliams in Houston; Editing by Daniel Wallis)