* Jeera March futures on NCDEX slipped on Tuesday, shedding more than one per cent on subdued export demand.

* Coriander April futures on NCDEX stretched losses on Tuesday on rise in arrivals amidst expectation of rise in production in one of the key coriander growing state of Gujarat.

* Turmeric April futures on NCDEX stretched gains on Tuesday on firm demand and fall in arrivals in the spot market.

* Spices Board pegs turmeric export from India for the period Apr-Sep this year at 99000 tonnes, up by 42 per cent year on. 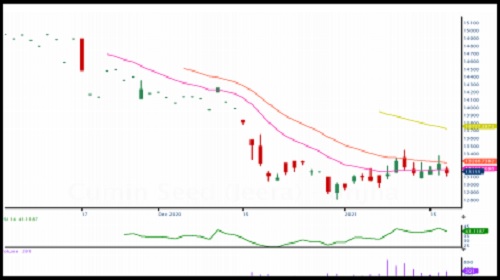 * India's vegetable oil imports rose over 20% on year to around 1.35 mln tn in December, according to SEA.

* As on Dec 31, farmers, processors, stockists and state-run agencies had around 400,000 tn stock, compared with nearly 1.2 mln tn a year ago, according to Mustard Oil Producers Association of India. 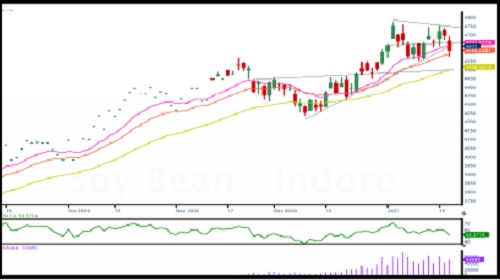 * Cotton production in Gujarat is likely to fall 14% to 7.4 mln bales in 2020-21 (Jul-Jun) due to a sharp decline in acreage, according to the state farm department's second advance estimate. Cotton acreage in Gujarat is at 2.28 mln ha in the current season against 2.65 mln ha last year. The decline in acreage is mainly due to the shift to other lucrative crops like groundnut.

* The UK-based Cotton Outlook has further cut its estimate for global output in 2020-21 (Aug-Jul) to 24.0 mln tn from 24.2 mln tn projected in November in its December report. The fall in output estimate is largely due to a reduction in production in India and the US. A slight increase in production is seen in Australia. The agency has scaled down its crop estimate for India to 6.21 mln tn for the ongoing season, from 6.29 mln tn projected a month ago. Global cotton consumption in 2020-21 is seen at 24.3 mln tn, against 24.2 mln tn projected the previous month. Consumption is seen higher on likely rise in demand from India. Ending stocks of the fibre for 2020-21 are seen at 325,000 tn, against 57,000 tn projected last month.

* The International Cotton Advisory Committee has scaled down its global output estimate for 2020-21 (AugJul) to 24.7 mln tn in its December report from 25.0 mln tn projected in the previous month. The fall in output estimate has largely been attributed to a smaller crop in the US, Brazil, and Pakistan. Production in India is expected at 6.20 mln tn, compared with 6.07 mln tn projected in the previous year. China is likely to produce 5.9 mln tn, while production in the US is expected to fall to 3.7 mln tn in the ongoing season. The committee has marginally scaled down its estimate for global consumption in 2020-21 to 24.3 mln tn as many countries enter fresh lockdowns because of COVID-19. Ending stock is estimated at 21.7 mln tn against 22.4 mln tn, projected a month ago. The committee has revised upward its estimate for global cotton exports for the ongoing season to 9.4 mln tn from 9.3 mln tn projected in the previous month.

* Global cotton prices will likely average higher on a year-on-year basis in 2021 amid a broader and deeper economic recovery, Fitch Solutions says in a note. It is forecasting cotton prices to average 70c a pound in 2021. Lower global supply in 2020/21 coupled with the sharp uptick in China's import demand will keep prices supported.

* The US Department of Agriculture has cut its estimate for global cotton output for 2020-21 to 116.1 mln bales (1 US bale = 218 kg) from 116.3 mln bales projected in October. The agency has retained its output estimate for India at 30.0 mln bales. India is the world largest producer of cotton. The agency maintained its estimates for India's cotton exports and ending stocks at 5.0 mln bales and 20.9 mln bales, respectively. Domestic demand is seen steady at 23.0 mln bales. Globally, the output is likely to fall as production is expected to decline in Pakistan. Global cotton consumption is seen at 114.1 mln tn, marginally down from 114.2 mln bales projected last month. Global exports for 2020-21 are now seen at 42.9 mln bales, compared with 42.2 mln bales estimated a month ago. Ending stocks are seen higher at 101.4 mln bales against 101.1 mln bales, the report said. The agency has kept its estimate for output in the US largely steady at 17.09 mln bales.

* The much awaited and long delayed export agreement between Cotton Corp of India and Bangladesh government is now in its final stage and may materialise by December, said Pradeep Agarwal, chairman and managing director of the organisation.

* The government has raised the support price of medium staple cotton by 260 rupees per 100 kg to 5,515 rupees, and that of long staple by 275 rupees to 5,825 rupees. AGRIDEX NCDEX As prices unable to move above the recent high of 1162, sentiments turned bearish and expect to see continuation of selling pressure towards 1140/1130 levels. KAPAS NCDEX APR21 Inability to move above 1200 could see selloffs to 1180/1175 levels. COTTON MCX JAN As long as prices stays above 20950 could see pullbacks to 21250 levels. Else, could see selling pressure. COCUDAKL NCDEX FEB A trend line support is seen at 1970 which if breaks could see downfall to 1950/1920 levels. Else, could see choppy trading session. TECHNICAL VIEW Agri Picks, 20.01.2021 OTHERS Market Buzz 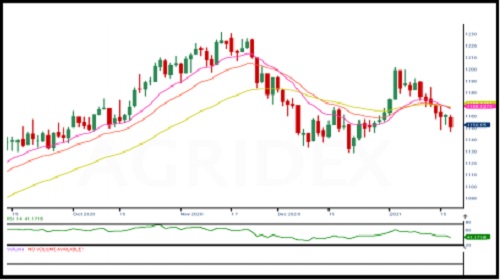 * Chana March futures on NCDEX varied in thin ranges though it managed to end the session marginally up.

* Farmers in the country have sown rabi chana across 10.9 million hectares so far, up 3.5 per cent compared to same period last year , farm ministry data showed.

* The National Agricultural Cooperative Marketing Federation of India has offered discount of 5-10% on chana produced in the 2019-20 (Jul-Jun) rabi season, and subsequently procured by the agency at the minimum support price for that year, according to its website.

* According to the Agricultural and Processed Food Products Export Development Authority, India’s guar gum export for the Apr-Oct period this year was 126808 tonnes compared to 256236tonnes during the corresponding period last year.

* Steady moves were witnessed in the local natural rubber market on Tuesday. 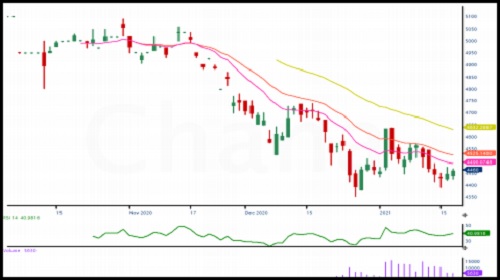