Retest of 65 is likely

* Yen has traded on a firm note despite Bank of Japan contemplating at the additional easing measures. It seems the currency continues to benefit from the safe-haven appeal amid an uncertain trade backdrop.

* However, Japanese macro numbers have been mixed. Japan’s Q1 GDP unexpectedly grew by 2.1%, driven by the fact imports declined faster than exports. However, the headline number veils weakness in domestic demand and capital expenditure readings. With consumption and capex indicators falling over the quarter, Q2 GDP growth is seen flat or slightly down.

* Meanwhile, US-China trade war remains a threat to Japanese export growth, with outbound shipments falling for sixth consecutive month. Slowdown in Japan’s exports is being aggravated by a simultaneous slowdown in South Korea and China. Softness in domestic consumption has given birth to speculation that the government might postpone hike in the sales tax (scheduled in October), which has been already delayed twice.

* On currency outlook, tumultuous global trade backdrop will continue to underpin Yen, as capital inflows will remain consistent into Japan during times of escalating trade tensions. We see the yen trading between 107-110 against the USD.

* Since past few months the pair is trending up, forming ascending top and bottom formation

* Steady move above short-term averages has kept trading outlook positive. Also positive divergence is seen between the pair and its RSI indicator.

* Recent price structure shows swift reversal from the support zone of 63.2-63 levels, hence a sustained move above 64 could lead the Pair towards levels of 65 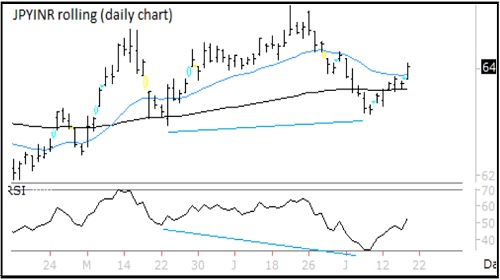