JPYINR has traded with negative note and declined by 0.23% in the last trading day - Choice Broking

* On an hourly time frame, USDINR has closed with gain of 0.04% in the last trading session.

* Furthermore, pair has traded above 36 days High Line EMA’s but it couldn’t break the past trading day’s high, even more price has faced resistance by 200 days from upper level at Rs. 69.14.

* In addition, momentum indicator Stochastic RSI(22) has continued negative move as per last trading days and MACD has also shown negative biasness, which point out further bearish trend in the counter.

* So based on the above structure, we expect moderate bearish move in USDINR towards 68.80 levels. 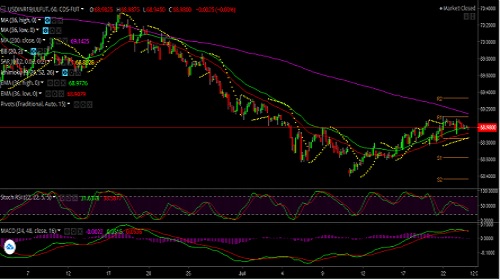 * On an hourly chart, JPYINR has traded with negative note and declined by 0.23% in the last trading day.

* Moreover, on the pair has moved below 36 days Low line EMA’s, which adds further more pressure for downtrend in the counter.

* Furthermore, price has sustained below 200 days SMA’s, and Parabolic sar, which shows more bearish move in near term.

* In addition, a momentum indicator Stochastic RSI(22) and MACD have shown negative crossover , which may keep the prices downside towards the levels of Rs. 63.60. 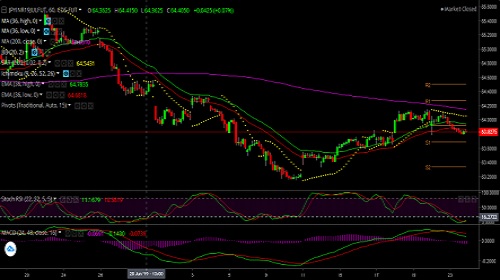 * On an hourly time frame, GBPINR has closed with gain of 0.10% in the last trading session.

* Furthermore, pair has pulled back from the daily support point at a level Rs. 85.60 and has given a breakout from 36 days Low line EMA’s, which may be next support for the pair.

* So based on above technical structure we expect moderate bearish movement towards 85.75 in GBPINR future. 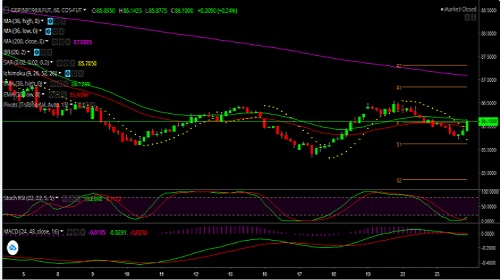 * EURINR has settled on negative note with slightly loss of 0.28 % on the Tuesday trading session.

* On an hourly timeframe, price has shifted below 36 days high-low channel EMA’s and Parabolic sar, which adds more bearishness in the pair.

* Moreover, pair has taken a support from last week lows level at Rs. 77.06, which could be a support for the price. Moreover, a momentum indicator Stochastic RSI(22) has moved below the over sold zone and MACD has shown negative crossover, which have added more strength for continuation of bearish movement in the counter.

* On the basis of above structure, we expect further negative move from some peaks in Pair towards 77.10 level. 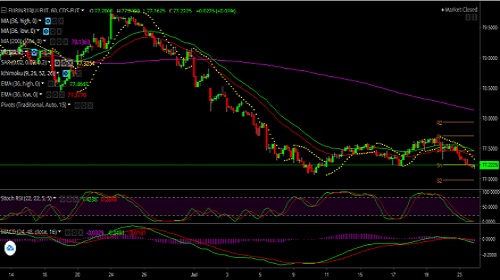