* IndusInd Bank Limited is a Mumbai based Indian new generation bank, established in 1994. The bank offers commercial, transactional and electronic banking products and services. IndusInd Bank was inaugurated in April 1994 by then Union Finance Minister Manmohan Singh. Indusind Bank is the first among the new-generation private banks in India.

* The bank was the vision of Srichand P Hinduja, a Non-Resident Indian businessman and head of the Hinduja Group.A decade after its incorporation, June 2004, the bank was merged with Ashok Leyland Finance, which is among the largest leasing finance and hire purchase companies in India.IndusInd Bank has emerged as one of the fastest-growing banks in the banking sector in India. As on 31 December 2018, IndusInd Bank has 1,558 branches, and 2453 ATMs spread across in different geographical locations of the country. It also has representative offices in London, Dubai and Abu Dhabi. Mumbai has the maximum number of bank branches followed by New Delhi and Chennai. It is the first Indian bank to receive ISO 9001:2000 certification for its corporate office and its entire network of branches.

* The bank has entered into a strategic alliance with Religare Securities for offering a value-added 3- in-1 savings accounts-linked package to customers comprising a savings bank account, a depository account, and an Internet trading account.

* On a weekly chart, the stock has been trading with a strong Horizontal Trend line support which is placed at 1342.86 level which shows a bounce back movement in the counter.

* Moreover, the stock has closed above its 200 Weeks Simple Moving Average which shows a positive trend for the time being.

* On a daily chart, the stock has given a breakout of its upper band of Descending Triangle formation which is a Bullish Reversal sign and indicates an upside movement in the counter.

* Furthermore, the price has also moved above the upper leg of “Bollinger Band” which suggests a bullish rally will continue further for near-term.

* A daily momentum indicator RSI reading is at 53.16 level with a positive crossover as well as positive divergence has been seen which points out for a positive breath in the stock.

* Based on the above technical structure, we are expecting an upside movement in the INDUSINDBK in a few trading sessions. 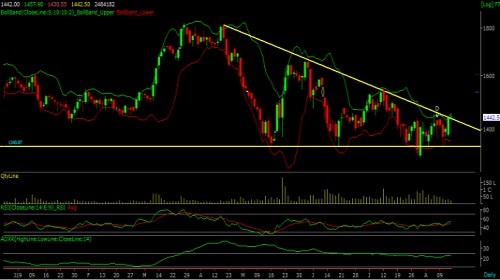