Women hold themselves back at work: Survey

Why women who code matter

How not to get more women to work

Of press freedom and confident women

What women need to do to beat gender pay gap

Gender pay gap is real and it can manifest in the workplace in many ways. For AD, a 37-year-old woman who did not want to be identified but was willing to give her initials, it first played out in 2010 at a global professional services company where she had been working for two years. “I was denied promotion because I was on maternity leave during appraisal season. Instead a male colleague who had only completed a year was promoted when as per company policy a promotion is considered only after two years," said AD. “I had a new superior who was a woman based out of the US but she denied me a promotion because she thought I wouldn’t give a hundred percent to my work after childbirth," said AD, who continued working at the company. Soon she also realised that she drew home a salary that was at least 13% less than what her male counterparts earned. AD finally put in her papers in 2013.

AD, of course, is not alone. According to the Monster Salary Index survey 2019, women in India earn on average 19% less than their male counterparts. The disparity is highest in the IT sector where men make about 26% more than women, it said. Data from the International Labour Organisation (ILO) is starker. According to ILO, on average, women are still paid 34% less than men in India.

“The main reasons for this are cultural sanctions and patriarchal hierarchies that define gender roles hindering equal opportunity," said Rituparna Chakraborty, executive vice-president and co-founder, Teamlease Services Pvt. Ltd, a human resource company. Women in India are perceived as primary caregivers and are expected to not take up roles that involve intellectual or physical stress. Chakraborty said, as much as there is discrimination on how much a woman should earn, there are also limits on what roles she can take up. “On one hand, the labour market considers women less privileged for certain coveted roles and on the other, it deems fit to not pay them on par with men," added Chakraborty.

Gurgaon-based HR professional Divya, who didn’t want to reveal her last name, said she faced discrimination for most of her professional life. The mindset that women need to be submissive and get paid to suffice their “shopping" needs is something she faced often. “In some cases, I was paid less for the same work done by a male colleague at the same level. In others, a male colleague with half my experience and knowledge was promoted to the same level and given double the rewards. It is difficult to blame a full organisation in general. Actually it is the imbalanced leadership practices and terrible individual mentality that account for such incidents," said Divya, who is in her mid-30s and has a five-year-old daughter. 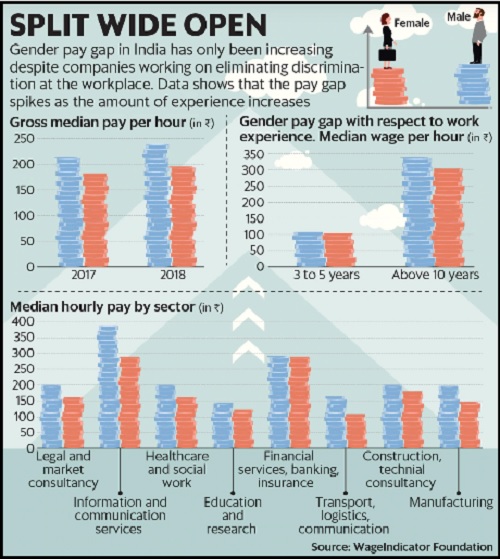 Chaitali Mukherjee, leader - people and organisation, PwC India Pvt. Ltd, a consultancy firm, said women by default are expected to do more for less. This could result in lack of confidence. This also makes it tougher for women to toggle both the ends, professional and personal.

Divya said she would often get frustrated for being paid less than men, and even single women or married women with no children. “There is enough data available which shows men are paid more then women. But there isn’t enough data to prove the discrimination within women based on whether they’re married or have children. But if women are dealing with this, they need to stop playing the victim game and take matters in their hands," said Chakraborty.

What needs to change

One small yet meaningful push back to unequal pay will be if women actually take charge of their money. “Unless they demonstrate through their actions that they are in charge of their money, they will not be taken seriously," said Mrin Agarwal, financial educator, founder director of Finsafe India Pvt. Ltd and co-founder of Womantra.

While some organisations have policies that address women’s issues, it’s still a work-in-progress. “The increasing demands of the modern workplace, with its cross-cultural and multi-locational work dimensions sometimes counteract such measures," said Chakraborty.

Barriers don’t just prevail in the professional journey. Women also have milestones such as marriage, maternity, child rearing and other family responsibilities, which may force them to take a break from work. It may help if organisations are empathetic, accept that this is a reality, and realise that it doesn’t make women less competent than men. “While it is difficult to generalize the actual impact on the fight for equal pay can have on a woman’s life, it has to be a fight based on meritocracy and not merely on gender parity," added Chakraborty.

What women need to do

Women, especially if they are married, feel it’s okay to compromise on the salary front because they are not the sole breadwinners of their families. This is where the starting point of allowing yourself to be walked over begins, said Chakraborty.

Irrespective of what stage you’re at in your life, demonstrating that money is as important for you as it is for a man. Do this by taking financial decisions yourself rather than shifting the responsibility to the men of the family. Work with a financial planner if you need help. Define your money goals and investment objectives. “If you’re married, manage your expenses jointly with your spouse and participate in the financial decisions such as taking loans, making investments and even tracking the progress of your investments," said Vishal Dhawan, certified financial planner and founder, Plan Ahead Wealth Advisors.

If you’re a mother, draw your financial plan keeping the needs of the family in mind. Insist on contributing to the household finances so that you’re seen as an equal in the family. “If your spouse earns more than you, ask him to contribute more while you pitch in as much as your salary allows you to," said Dhawan. Try and contribute as much as possible towards short- and long-term goals such as family holidays or your child’s education.

If you’re taking a sabbatical to raise your child, include this in your financial plan and manage your investments and savings accordingly. “As a mother, build financial consciousness among your children and ensure your daughters grow up to know their worth and fight for what they deserve. Parents on their part need to show inclusiveness and open mindedness towards women so that their sons can learn the same," said Agarwal. Grooming your children will contain the biases from creeping into society.

“Collective bargaining geared towards the removal of the discriminatory portion of the gender pay gap has huge potential to reduce gender pay inequalities," said Chakraborty.

Also, have a clear Will and identify financial guardians for your children.

Lastly, don’t allow the men around you to believe that your primary responsibility is towards the household and theirs towards work. It’s important for you to have an unbiased outlook and make men realise that they must focus on home and work equally, just as women. This will play a key role in changing the way women are perceived in the professional space as well. The battle is long and may be painstaking, but it’s worth a shot.

Women hold themselves back at work: Survey

Why women who code matter

How not to get more women to work

Of press freedom and confident women

India in talks with EU for trade deal, open to pact with UK