The Delhi government’s decision to make public transport free for women has opened a debate about the ways in which women access transport and the barriers they face. Census data from 2011 revealed that 45% of women do not even travel for work, meaning that they work out of their own houses. As a result, India has one of the world’s most lopsided ratios of male versus female commuting, according to data aggregated by the Centre for Diet and Activity Research, a research unit at the University of Cambridge. 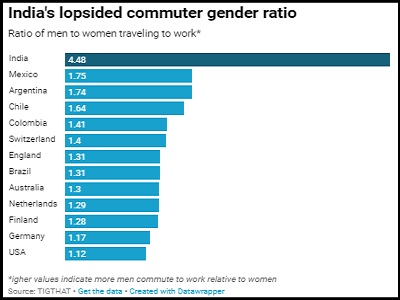 Most of the data on commuting in India comes from the 2011 census which collected data on commuting patterns of those people not employed in agriculture or in household industries. For both men and women across India, walking is the most common commute to work. For women, after walking, the bus is the most common mode of transport. This is in contrast to men for whom, after walking, cycling and riding a scooter or bike to work are the most common modes of transport. This could reflect both the lower rates of asset ownership among women and lack of finances for them to pay for their commute. But it could also reflect the fact that women simply travel much shorter distances to work.

Women travelling shorter distances to work - or the gender commuting gap - is a global phenomenon. A big reason for this is that women, rather than men, are more likely to be the primary caregiver for children. Data from the OECD Family Database shows that the time spent on the daily commute is higher for men with young children (defined here as before school-age children) than for the average man. However, for women with young children, the commute time crashes. 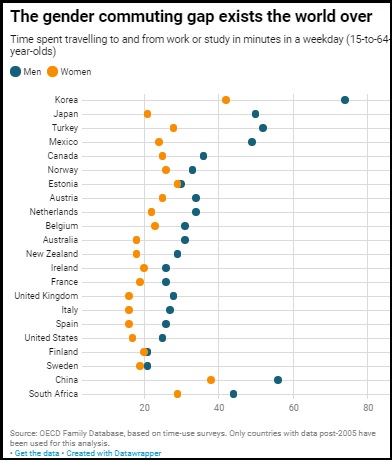 “This gender commuting gap may be linked to the gender wage gap, which also really opens up after the arrival of children in the family. If women take work closer to home because of caring responsibilities, they may be less likely to find a job well matched to their skills or with a high-paying employer," the Institute for Fiscal Studies suggested while analysing a similar drop off in travel time for mothers in the UK.

This is also happening in India where gender expectations of women working outside their homes and affordability of transport mean that women are restricted to jobs closer to their homes. For instance, a 2005 study in Delhi slums found that women spend more time travelling on slower modes of transport to access work since faster modes are more expensive. Similarly, women respondents in a 2011 World Bank study in Mumbai reported finding the bus pass prohibitively expensive and “pointed out that cheap bus travel would enable them to better access the local trains which in turn could connect them to better-paying jobs in South and Central Mumbai."

Across India’s big cities, buses are a key means of commuting for women. Mumbai is the exception where trains are equally important and where patterns of male and female commutes mirror each other most closely, indicating greater ease of access and fewer barriers for women.

As for whether the Delhi experiment will bring more women into the city’s public transport system and make them feel safer, that is to be seen. Some evidence is promising - the Estonian city of Tallinn saw a leap in the share of women using public transport after it made it free.

Rukmini S. is a Chennai-based journalist