* Copper prices on MCX hit lifetime high of 695.90 level underpinned by a weak U.S. dollar and tight supply concerns. Investors fret over liquidity conditions following a report that the China central bank was focusing more on money market interest rates than the size of its operations.

* Goldman Sachs raises 12 month copper price target to US$10,500/t. Goldman Sachs warned the copper market is now on the cusp of the tightest phase in what is expected to be the largest deficit in a decade.

* LME copper jumped on Monday to cross the $9,000 a tonne level for the first time since September 2011, extending a rally that has been driven mainly by expectation of a pick-up in demand after the Chinese New Year.

* Three-month copper on the LME climbed as much as 3.1% to $9,187 a tonne, the highest since September 2011, also helped by a weaker dollar. Last week, it posted its third straight weekly gain.

* The surge on Friday saw a gain of more than 4% in Comex copper futures prices alone a day after the Lunar New Year ended, as tight supplies and positive sentiment towards base metals continued.

* Copper demand is expected to rise as top consumer China returns from a long holiday and in hopes of a stronger global economic recovery due to COVID-19 vaccine roll-outs and further stimulus.

* A continuing supply and demand imbalance in the copper market has driven prices to these near 10-year highs. On the supply side, the US Geological Survey (USGS) estimated global mine production of copper was 20 million tonnes in 2020, a drop of 2% compared to 2019.

* USGS said that global copper output declined over the previous year primarily due to COVID-19 lockdowns in April and May. These disruptions significantly affected output in Peru, the second-ranked mine producer of copper. Production from Peru, the second ranked miner fell 12.5% in 2020.

* Copper stocks in deposits registered with the LME total 76,025 tonnes, close to its lowest level since 2005. The three-month spot copper premium over metal is increasing, suggesting a shortage of supply nearby.

* Industrial metal prices powering to the highest in years on bets of an economic recovery and worldwide push for cleaner, greener energy will unleash vast, pent-up demand.

* Goldman Sachs warned of a historic shortage with "the market now on the cusp of the tightest phase in what we expect to be the largest deficit in a decade" as Chinese buying "triggers the next leg higher" adding to expectations that prices will near a record sooner rather than later.

* In a report issued in January, with preliminary data from October 2020, the International Copper Study Group (ICSG) said world mine production fell by 3.5% in the April to May period last year. 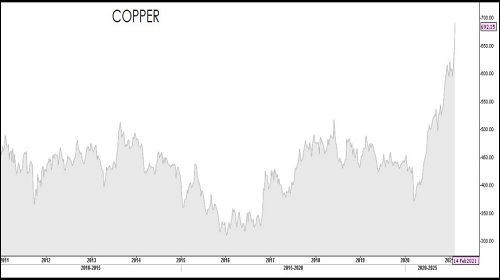 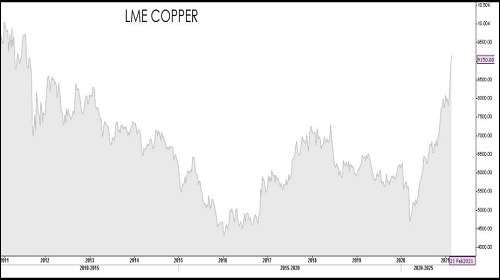