Who would have thought that knowing the right formula for the humble net profit margin would be worth over ₹350 crore?

At least for National Stock Exchange of India Ltd, that would be the amount at stake if it fails to convince Securities and Exchange Board of India (Sebi) that the regulator miscalculated the ratio while arriving at its fine in the co-location case. 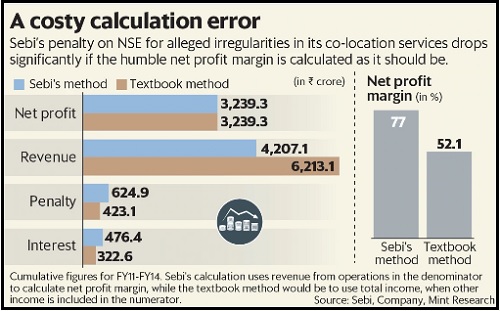 So, here’s the deal. Sebi’s puzzling order starts by saying that allegations of fraudulent practices stand disproved against the exchange in the co-location case. While multiple audits threw up no evidence to prove malfeasance, some of them did say NSE’s systems are prone to abuse.

Hence, given that the exchange did not do sufficient due diligence and rolled out a trading system that was prone to abuse, Sebi has decided to disgorge from NSE every rupee of profit it made by offering co-location services in the period between fiscal year (FY) 2011 and FY14. NSE records show that it made ₹811.5 crore in revenue from various co-location related services.

But it isn’t clear what the division’s expenses were and how much profit it made. As a workaround, Sebi has decided to use the firm-wide net profit margin as a proxy, and concluded that the profits from the co-location services would be in the same ratio as well.

But here’s the nub. According to Sebi, NSE’s net profit margin during the four years was 77%—it was, in fact, 52%. Using the former figure, Sebi decided that co-location services made a profit of ₹624.9 crore. Where Sebi’s whole-time member has erred is that he has included interest and investment income to calculate net profit, but left those out while calculating revenue. As a result, the denominator is deflated and the ratio is naturally inflated.

According to a professor of finance: “If other income had been considered as part of revenues, the margin, and, consequently, the disgorgement amount, would have been lower. The correct method would be to either use operating profit/revenue from operations or net profit/total revenues including other income."

“Other income should be left out entirely; it is artificially raising net margin," says another US-based professor of finance.

The differential of 25 percentage points between Sebi’s method and the textbook method results in a difference of ₹200 crore, and with compounded interest, the total difference is over ₹350 crore.

Of course, it would be fair to say that all this is nit-picking. The last thing NSE would be planning to argue is about Sebi’s calculation errors. It is more likely to say that since there were no ill-gotten gains, there is no question of any disgorgement.

But since the column is called Mark to Market, we just couldn’t let this deviation pass. Sebi is the chief torch-bearer when it comes to investor education. We would all want it to educate the markets on using financial ratios accurately, wouldn’t we?