Shine from the jewellery business diminishes for Titan in June quarter

Shares of Titan Co. Ltd have declined by almost 22% from their annual closing high seen on 28 June.

The company released its pre-quarterly update for the three months ended June on 8 July, wherein it said that the quarter had witnessed a tough macroeconomic environment.

Given that, expectations from the June quarter results were not particularly high. On a stand-alone basis, Titan’s mainstay jewellery business, accounting for 81% of total revenues, clocked 13% growth, below the company’s internal expectations. A sharp surge in gold prices and slowdown in consumption weighed on consumer demand in June. 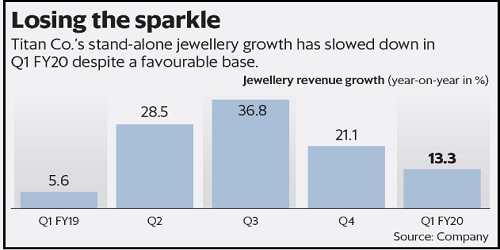 However, outlook for the September quarter, too, doesn’t appear to be great. In a post-results conference call, the management indicated that July has been almost as bad as the second half of June.

“We have started to see some early green shoots in last weekend of July and early August," it pointed out. Still, how demand conditions pan out remains to be seen.

The company is hopeful of demand revival in the second half of the current fiscal year, which includes the festive season, a time when sales are typically robust.

“To be sure, it is difficult to say whether demand will improve from festival season. It’s worth noting that many factors such as high gold prices, 2.5% increase in customs duty and weaker consumer sentiment have all come together this time," said Amnish Aggarwal, head of research at Prabhudas Lilladher Pvt. Ltd.

Titan’s watch business revenues, accounting for 14% of the total, increased at a relatively faster pace of 20%.

The company said the watch revenue growth was partly aided by part execution of a large institutional order from Tata Consultancy Services Ltd.

However, given that the segment’s contribution to the overall scheme of things is small, it doesn’t move the needle as much.

Overall, Titan’s revenues increased 14% year-on-year to ₹4,940 crore, a tad below Bloomberg’s consensus estimates. Earnings before interest, tax, depreciation and amortization increased by 14% as well. Even as employee costs and other expenses increased at a faster pace, a decline in advertising expenses helped.

Analysts said the Titan stock is capturing a good share of the pessimism surrounding the demand environment.

Still, valuations are not exactly inexpensive. Currently, the Titan stock trade at almost 51 times estimated earnings for FY20. Lacklustre June quarter results and muted demand outlook could well keep meaningful appreciation at bay from a near- to medium-term perspective.