Japan’s Suzuki Motor Corp. had on 10 October trimmed its FY20 earnings estimate by 30%, citing slowdown in India’s automobile market, besides lower production in Japan and exchange rate fluctuations. After all, its unit, Maruti Suzuki India Ltd, contributes a bulk of the parent’s consolidated revenue and profit.

Maruti Suzuki’s dismal Q2FY20 results, albeit in-line with the watered-down forecasts of analysts, only underscore the parent’s pessimism. Weak demand precipitated a 30% year-on-year slump in vehicle sales, which resulted in a 25% drop in net sales.

Worse, whatever sales came in was on the back of the highest-ever average quarterly discount of ₹25,761 per vehicle. It was way above the ₹18,758 and ₹16,941 per vehicle in Q2FY19 and Q1FY20, respectively. Despite the incentives, the company’s overall market share fell from 52.1% a year earlier to 49.8% in the three months ended September 2019.

Net realization per vehicle increased about 6% in the just-ended quarter. However, this was on the back of price hikes to offset a cost increase due to stricter safety and regulatory norms.

Some analysts said the worst could be behind. However, Maruti Suzuki’s chairman R.C. Bhargava said the auto market is still not out of the woods, and a revival will depend on demand over the next two-three months. 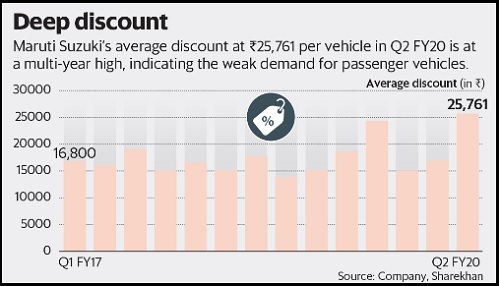 A sudden increase in the cost of ownership at a time of liquidity crunch in the retail segment hit sales last quarter.

The company’s costs, including advertising and marketing expenses, as a percentage to sales also rose during the quarter. Ebitda (earnings before interest, tax, depreciation and amortization) fell 53% to ₹1,606 crore.

The Ebitda margin drop of 580 basis points to 9.5% failed to appease investors, even though it was in line with the average estimate of 20 brokers collated by Bloomberg.

The moot question is: Will Maruti Suzuki be able to regain lost market share? Time will tell if the market leader will have to cede some market share, or profits, or both, considering the ongoing shift in India’s auto market and rising competition.

Further, from an investor standpoint, the earnings traction over the next 12-18 months is questionable. Q2 FY20’s net profit was 40% lower. It was better than estimated due to higher other income and lower effective tax rate.

That said, a robust recovery in FY20 earnings cannot be expected, given that the parent has sharply trimmed its guidance.

In this context, the recent rally in Maruti Suzuki’s stock pegs the valuation at 27 times its one-year forward estimated earnings, which is expensive given the turbulence in the domestic auto market.

Telcos` stocks rise ahead of AGR hearing, Vodafone Idea up 7%