Indian equities have given up their post-election gains. Dalal Street’s euphoria fizzled out when no big-bang stimulus was announced in the Union budget. On the contrary, a surcharge was levied on certain foreign investors, which dampened investor sentiment. Since May, the MSCI India Index is down more than 5% and so is the Nifty 50.

With that, hope—a key driver of the stock market—has taken a back seat, and the focus is back to fundamentals. There’s not much to raise optimism there. Domestic issues include a widespread demand slowdown, tighter liquidity conditions and poor corporate earnings. Globally, the scenario on growth is grim. In a bid to boost economic recovery, central banks across the world are in an easing mode. 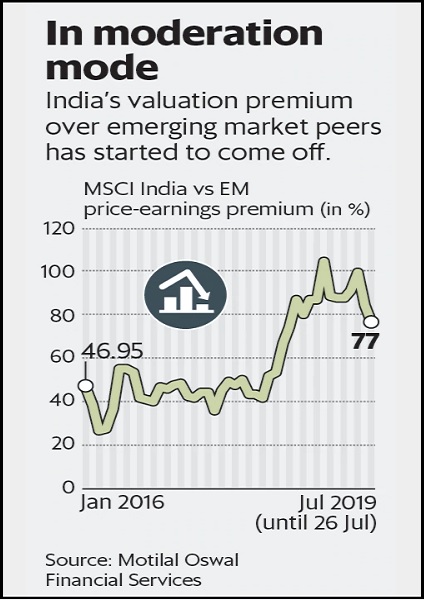 “Growth is slowing, but so is it elsewhere. With little happening locally, headline Indian indices are now likely to move with EM (emerging market) trends. US Fed action/commentary, US-China trade wars and dollar outcomes are likely to dominate market direction (in the) near term," analysts at foreign research house Bank of America Merrill Lynch said in a report.

Further, it said that for now recovery in earnings is weak, limiting the scope for stocks outside of major indices. “Until growth and earnings recover, large cap index stocks can continue to outperform," added Bank of America Merrill Lynch. Its Nifty target for December 2019 is 11,300, points against the current level of 11,284.30 points.

Another brokerage house PhillipCapital (India) Pvt. Ltd slashed its one-year Nifty target to 11,300-11,800 points from 12,200-12,700 points, reiterating concerns over worsening macros and earnings outlook. “Consensus Nifty FY20/21 EPS is currently forecasting a growth of 23%/18% with nominal GDP growth assumption of 10%—which indicates high risk of meaningful earnings downgrade," it said in a report on 24 July. EPS stands for earnings per share, and GDP is gross domestic product.

PhillipCapital has cited a variety of negative factors to support this downgrade, including higher tax incidence on FIIs (foreign institutional investors) that will impact inflows, likelihood of Nifty price-to-earnings (P-E) premium shrinkage and lack of growth triggers in the medium-to-long term. “We also believe that India may shed some of its valuation premium," added the report.

As the accompanying chart shows, India’s relative valuations premium to its emerging market peers has fallen. Currently, the MSCI India Index is trading at a one-year-forward P-E multiple of 17 times. While the valuation multiple has corrected from its recent highs, India is still an expensive bet.