The broader markets ended in mixed with Midcap up by 0.3% - Religare Broking

Markets ended almost unchanged amid volatility, in line with prevailing consolidation bias. After opening on the positive note, the benchmark hovered in a range for most of the session however sharp decline in the last hour of trade erased all its gains and pushed the index into negative territory. The sell-off was led by the banking and financial sector. The news of border tension was largely weighing on the sentiment. Amid all, Nifty managed to recover some of its losses and ended marginally down by 0.1% at 11,505 levels.

The broader markets ended in mixed with Midcap up by 0.3% and smallcap down by 0.3%. We feel markets may consolidate further amid mixed signals and traders have no option but to align their trades according to the trend. The fresh breakdown in the banking index has derailed the possibility of a directional up move in the Nifty, at least in the near future. On the downside, a decisive break below 11,400 in Nifty could result in a dip closer to the 11,200. We maintain our view to focus on the selection of stocks and positioning trades on both sides. We prefer defensive viz. pharma and IT for long trades while a rebound in banking and financials should be considered for short positions. 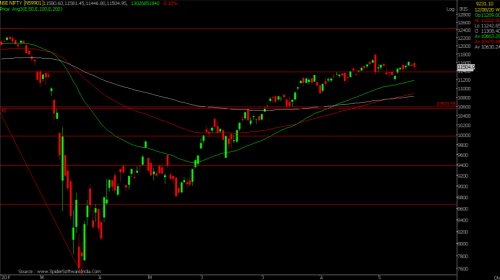 * Zydus Cadila announced that it has received final approval from the USFDA to market Potassium Chloride extended release tablets.

* Avantel Ltd has received an order for an amount of Rs. 15.97 Cr from Bharat Electronics Ltd, for supply of URF Subsystems.

* Ireland’s pharmaceutical company Perrigo has announced a voluntary recall of albuterol sulfate inhalation aerosol. The action was taken as there were complaints that some units may not dispense due to clogging. The action of Perrigo is likely to increase sales of the same drug manufactured by Lupin and Cipla.

ADANIPORTS FUTS added 5% in open interest addition as long buildup was seen in it in till closing time. Current chart pattern also indicates further up move in its price. We suggest buying ADANIPORTS as per below levels.

* Godrej Consumer Products Ltd (GCPL) reported better than expected numbers for Q1FY21 as compared to other peers. Its revenue de-grew by 1% YoY to Rs 2,327 cr as it witnessed mixed performance across markets. On operational front, EBITDA improved by 3.7% YoY to Rs 472cr, while EBITDA margin increased 90bps mainly due to lower advertisement cost (down by 45% YoY) and other expenses (down by 2.2%). Further PAT de-grew by 3.2% YoY to Rs 394.9cr, on account of exceptional item in this quarter and tax adjustment in Q1FY20.

* In the near term GCPL’s discretionary products would face challenges however larger part of portfolio i.e. hygiene and household insecticides products would continue to witness strong demand in the coming quarters. Thus from a medium to long-term growth prospects, we maintain a positive view on GCPL. Going forward, the company’s focus would be on expanding portfolio in both domestic and international markets by launching innovative products, cost optimising to protect margins and lastly investing more behind distribution and supply chain channels such as e-commerce platforms as well as via chemist would support growth. Hence we maintain a Buy on the stock with a revised target price of Rs 845.