* Equity benchmarks snapped past ten consecutive sessions up move and ended the weekly derivative expiry session at 11680, down 291 or 2.4%. The market breadth remained negative with A/D ratio of 1:2.8. Sectorally, all major indices ended in red weighed by financials,, IT and pharma.

* In line with our view, profit booking emerged from the psychological mark of 12000, which the index failed to surpass for the fourth time after a 1200-point sharp up move. As a result, the daily price action formed a sizable bear candle engulfing the past five session’s trading range (11790-12022). In the process, the recently run up IT sector underwent profit booking. In turn, this helped IT stocks to retrace past couple of week’s sharp up move

* The sharp decline from overbought territory weighed by across sector sell-off amid weak global cues, signifies pause in upward momentum. However, from here on, we believe strong support would emerge at 11450-11550 rang and we do not expect it to breach in coming weeks. Meanwhile, upside will be capped at psychological mark of 12000 which coincides with 123.6% external retracement of September decline (11794-10790), at 12031

* We believe the broader market is approaching its maturity of time wise correction. Since 2009, post a sharp up move (more than 25%) in the Nifty midcap and small cap indices, the intermediate average correction to the tune of 12-15% have offered an incremental buying opportunity.

* Meanwhile, time wise they undergo a secondary phase for five to six weeks. In the current scenario, both indices have approached maturity of its price wise correction after 10% correction. Thus, ongoing consolidation should not be construed as negative as the broader structure remains positive. Instead, dips should be capitalised on as incremental buying opportunities in quality stocks

* We believe ongoing corrective phase would find its feet around 11450-11550 range as it is confluence of: 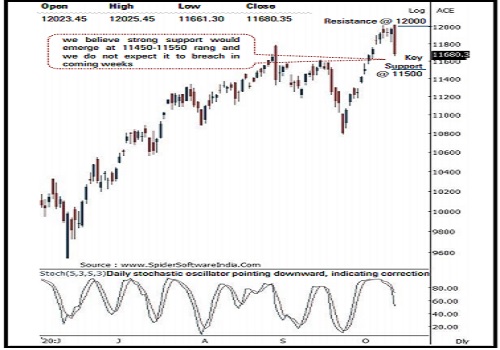 * The Bank Nifty witnessed sharp decline and closed the weekly derivative expiry session lower by more than 3 % on Thursday . The profit booking was broad based as all the 12 index constituents closed in the red . The Bank Nifty ended the session at 23072 , down by 802 points or 3 . 4 %

* The daily price action formed a sizable bear candle which completely engulfed its previous session price action signalling profit booking after a sharp up move of more than 3500 points in the past two weeks . A follow through weakness below Thursday low (22970 ) will signal breach of the last six session trading range of 24200 -23000 , hence will lead to extension of the decline towards the major support area of 22200 -22000 in the coming sessions .

* The Bank Nifty on Thursday session has reacted lower from near the 80 % retracement of the entire September 2020 decline (25232 -20405 ) highlighting profit booking at higher levels . Going ahead we expect consolidation and formation of higher base in the broad range of 22000 -24000 which will lead to cool off in the daily and weekly stochastic and will make the market healthy .

* Thus, the current breather should not be construed as negative as the broader structure remains positive . Instead dips should be capitalised on as incremental buying opportunities in quality banking stocks

* The index has crucial short term support base at 22000 -22200 levels being the confluence of the following :

* b) The previous week low is also placed around 22200 levels

* In the coming sessions, the index is opening on a positive note on the back of positive Asian cues . We expect the index to hold onto immediate support area of 23000 being the lower band of the last six session trading range and witness a pullback .

* Hence after a positive opening use dips towards 23010 -23070 for creating long position for target of 23290 with a stoploss of 22890 Among the oscillators the daily stochastic remain in downtrend and is currently placed at a reading of 45 , indicating continuation of the corrective decline in coming session 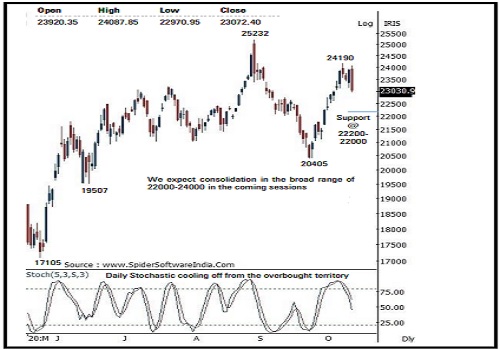