* The price action formed a bull candle carrying positive gap, indicating acceleration of upward momentum on breach of past four week’s high (9584). In the process, the index almost achieved our earmarked target of 10000

* Key point to highlight during the ongoing up move is that the Nifty has witnessed faster retracement in smaller degree time frame as it entirely retraced past 16 session’s decline in just four sessions (as shown in adjoining chart). Faster pace of retracement signifies inherent strength, auguring well for durability of ongoing up move near psychological mark of 10000

* The formation of higher peak and trough supported by improving market breadth indicates rejuvenation of upward momentum that makes us confident of revising support base upward at 9500 as it is :

* In the past four sessions, the index has rallied over 900 points, hauling daily stochastic oscillator in overbought territory (92), indicating possibility of temporary breather near psychological mark of 10000 cannot be ruled out. However, we believe such a temporary breather would make market healthy. In the process, we expect stock specific action to continue amid ongoing result season

* We believe, any cool off from here on should be capitalised on as incremental buying opportunity in quality midcap stocks as the midcap index logged a resolute breakout from past four week’s consolidation, indicating revived buying demand

* In the coming session, Nifty futures is likely to open on a flat to positive note tracking firm global cues. The formation of higher high-low signifies elevated buying demand. Hence, intraday dip towards 9745–9770 should be used to create long position for 9864

* Structurally, the index maintained the rhythm of arresting secondary corrective move near 61.8% of subsequent up move, since March 2020. In the current scenario, the Nifty staged a strong pullback after anchoring secondary correction near 61.8% retracement of April 2020 up move (8055-9890), at 8800. The formation of higher peak and trough along with broad based participation signifies robust price structure, auguring well for next leg of up move. 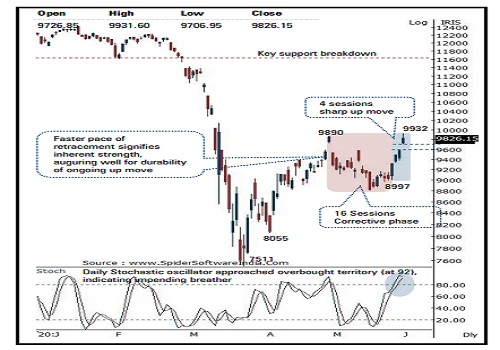 * The daily price action formed a bull candle with a higher high-low and a bullish gap (19297-19633) below its base signalling strength and continuance of the up move. In the process, the index approached our intermediate target of 20100 on expected lines

* Key point to highlight during the ongoing up move is that the Bank Nifty in the smaller time frame has witnessed a faster retracement of the last falling segment as nine session’s decline (20122-17105) was completely retraced in just four sessions. This signals a structural improvement and extension of the current up move towards the April 2020 high of 21967 in the coming weeks

* The Bank Nifty, during current up move, rallied more than 3100 points compared to earlier rally of 1835 points, indicating rejuvenation of upward momentum. As rallies are getting elongated, we expect the correction to get shallow. Hence, we revise support base upward at 18500-18600 as it is 50% retracement of ongoing up move (17105-20225) at 18600. We believe any temporary breather should not be considered as negative instead it should be capitalised on as incremental buying opportunity

* In the coming session, the index is opening on a flat to positive note on the back of strong global cues. The bias remain positive as the index forming higher high-low. Hence, use intraday dips towards 19790-19850 for creating long position for target of 20020 with a stop loss of 19720

* Among oscillators, the daily MACD remains in an up trend and recently generated a buy signal moving above its nine periods average, thus supporting continuance of the current up move in the coming sessions. 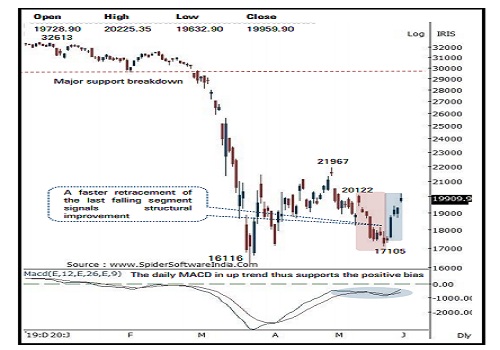