How Does IPO Work?

Tuesday’s weak closing was followed by a gap up opening with a very small margin. There were no major triggers on the domestic as well as global front and hence, we slipped into a consolidation thereafter. The intraday range shrunk considerably, resulting into a lack of momentum. However, from nowhere, there was sudden gush seen in the market at the stroke of the penultimate hour and what we witnessed thereafter, was really a jaw dropping development for our market. In last one and half hours, Nifty not only elevated from the key support levels; but also managed to reclaim the 11700 mark with some authority.

Although, our fingers were crossed since last couple of days, hoping 11549 not to get violated, we were a bit surprised with such velocity that we saw in heavyweights as well as across the broader market. Few individual counters were literally flying as if there is no tomorrow. Such surprises are always pleasant for the market participants and probably they would never complain to have such every day. Now, going back to technical observations, 11549 has once again proved its significance, in fact the respect has risen and hence, going ahead, it would now be treated as a major sacrosanct support level in the near term. The kind of broad based rally we have seen one day ahead of the derivative expiry, the stage is all set to see off the April series at record highs.

As far as levels are concerned, 11643 is likely to act as a sheet anchor in the forthcoming session; whereas on the higher side, a move towards 11775 – 11800 or beyond cannot be ruled out, provided the similar sort of momentum persists in the heavyweight pockets. Traders are advised to keep focusing on such counters who have corrected towards the breakout points and have shown reversal to resume their uptrend. 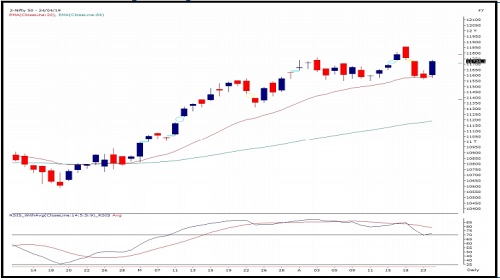 Post opening marginally positive, the Nifty Bank index traded in a narrow range till noon in yesterday's session. However, the index behaved exactly opposite to what was seen in Tuesday's session. While we witnessed sharp sell-off in the last hour on Tuesday, yesterday the banking space witnessed buying momentum in the last hour of the trade which led the index to end with gains of almost 400 points.

Since last couple of days, we have been mentioning the probability of higher volatility in the near term and the current market momentum depicts sharp swings on both the sides due to higher volatility. The momentum seen yesterday could extend 30050 and above that up to 30200. Swing traders can look to trade with positive bias but at the same time lock the profits as the index approach the above-mentioned targets. Also, due to increasing volatility, traders should follow strict money management principles when trading. For intraday, 29600 followed by 29435 will be seen as immediate support 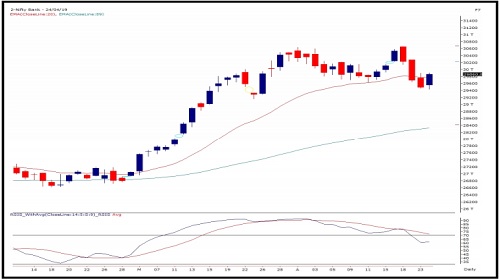 How Does IPO Work?

USDINR is expected to trade with bearish bias with selling recommended at higher levels.