VWAP levels of 14750 to remain important support for settlement…

* The week belonged to midcap and small cap stocks that remained resilient and witnessed continued upsides despite some profit booking being seen in the broader index. PSU stocks across sectors have experienced significant buying momentum and were major gainers for the week. On the other hand, heavyweights from technology, FMCG and banking space saw continued profit booking

* Going into settlement week, we expect volatility to remain high and current Put base of 15000 strike should act as immediate support for the index. Below this, VWAP levels of the series near 14750 are likely to act as major support for the February settlement. On the higher side, intermediate hurdle can be seen at 15300 levels, which have gained significant OI in the last few sessions

* Volatility index has stayed below 22 levels throughout the week despite profit booking being seen in the index. The current reading suggests some consolidation in the index in the near term. Only move above 23 should be considered as a caution for equities 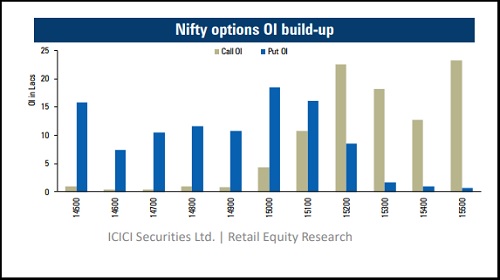 Bank Nifty likely to consolidate in range with 35000 as support

* The Bank Nifty ended last week almost flat amid high volatility where significant stock specific actions were observed. PSU banks were the major gainers of the week along with IDFC First Bank. On the other hand, private sector banking heavyweights came under pressure from higher levels

* The Bank Nifty started the week on a high note and made a high near 37500. However, from Tuesday onwards, profit booking was experienced in private sector space kept it under pressure. It ended the week with marginal losses and moved below its major Put base of 36000. Going ahead, we can expect a further decline in banking index towards its highest Put base of 35000

* Moreover, VWAP of the series is also near 35000 levels, which should be a major support for the index. On the higher side, we expect banking index to find it tough to surpass 37000 in the short-term. It is likely to consolidate below these levels

* After significant outperformance was seen from banking stocks in recent weeks, we may witness some consolidation and the price ratio is likely to remain below 2.40 levels in the near term. We expect it to move towards 2.36 in the coming weeks 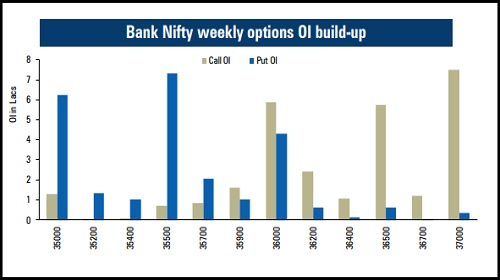 Markets pare some gains but still trade in green

Markets continue to trade in red in afternoon session

Markets likely to get pessimistic start after Ukraine-Russia tensions resurfaced

Markets likely to open on positive note after huge sell-off

India v New Zealand, 3rd ODI: Felt that we bowled a bit on the shorter side, says Shikhar Dhawan