* After an up move of over 7% in September, the Nifty recovered from the support level of 11200 in the October series with expiry happening with 2.6 % gain

* We saw positive FII inflows in both equity & debt markets in September. Inflows of nearly ~| 14500 crore in equity and ~| 5000 crore in debt were seen during the month

* Recovery was visible in midcap & small cap indices from lows as they gained 5.6% and 3.9%, respectively 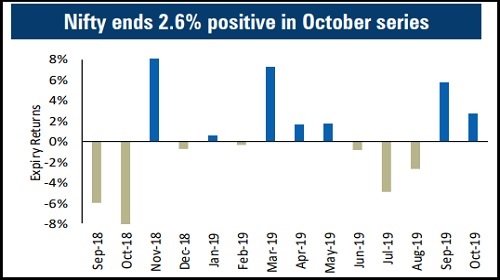 Nifty recovery may continue till 12300

* Major Call build-up was seen at 12000 & 12300 strikes. In the first session of the November series, the data has evolved a little wherein 12000 Call on the higher side is becoming an immediate hurdle level with OI of over 18 lakh shares. A move above 12000 is likely to take the Nifty towards 12300

* The Nifty is starting the new series with almost 14.3 million shares, which is second lowest Nifty OI ever seen in last three years. Continued closure is seen among short positions in the last couple of weeks. The roll spread has also remained under pressure and has been unable move above 50 points due to lack of fresh long additions in the November series

* Midcap stocks have started getting inflows seeing the stability pattern in the index. FII inflows of more than ~| 14500 crore were seen in October

* We believe the Nifty’s current uptrend may go into some consolidation before crossing a life-time high of 12120 in the shortterm. However, it should continue to pick up as the series progresses. Though almost all sectoral indices are contributing to the rally, we feel outperformance would be seen in cement and metal stocks in coming weeks

* Among stocks, FMCG and IT are starting the new series with significantly high open interest. Short covering rally was seen in PSU banks, cement, auto and metal stocks suggesting the long bias seems to be continuing in coming weeks. However, at higher levels, profit booking can be seen in select private banks and consumption stocks in the November series

* Stability of Indian equities will depend on the global set-up. The immediate catalyst for risk sentiment remains US-China trade talks and the geopolitical situation in the Middle East

* Similar to the Nifty, the banking index also saw a recovery. However, in relative terms, the Bank Nifty underperformed the Nifty index. The stagnant Bank Nifty/Nifty price ratio suggests that other sectors have also strongly participated in the current rally in the Nifty

* Looking at the options build-up, the Bank Nifty is likely to trade within the broader range of 31800-29000. We feel the key pivot for the series remains at 31000 for upsides to continue. On the Call side, however, additions were seen in 31000, which is also the second highest Call base for the series. We feel the upside in the index will continue with support now placed at 29000

* The Bank Nifty is starting the new series with significantly lower open interest with less than 0.8 million shares, which is the lowest Bank Nifty OI seen at the inception in the last eight years. The outperformance of the banking index can be attributed to sharp covering seen among banking heavyweights. The roll spread in the banking index also remained subdued and was seen around 100 points for most of the week

* The current price ratio of Bank Nifty/Nifty is near 2.53. We feel the ratio will consolidate near these levels while outperformance in banking stocks can be seen once the Bank Nifty closes above 31000 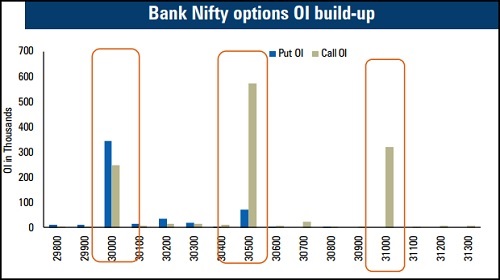 we can expect the positive momentum to continue - Swastika Investmart