Below is the Views On Indians with more than INR 1,000 crore wealth cross the 828-mark in the 2020 edition of IIFL Wealth Hurun India Rich List

* MUKESH AMBANI, CONTINUES TO BE THE RICHEST INDIAN FOR NINETH CONSECUTIVE YEAR. HE IS THE ONLY INDIAN TO FEATURE IN THE TOP 5 IN THE HURUN GLOBAL RICH LIST.

* 627 INCREASED THEIR WEALTH, OF WHICH 162ARE NEW ENTRANTS

* 64% SELF MADE, OF WHICH 2%ARE PROFESSIONAL MANAGERS

* BACKED BY STELLAR IPO OF HAPPIEST MINDS, THE FOUNDER ASHOK SOOTA, 77, WITH A WEALTH OF INR 3,700 CR , DEBUTS THE LIST

* RICHEST WOMAN IN THE LIST IS SMITA V CRISHNA, FOLLOWED BY KIRAN MAZUMDAR-SHAW.

* 20% OF THE INDIVIDUALS WHO REGISTERED A WEALTH OF MORE THAN INR 10,000 CRORE RESIDE OUTSIDE OF INDIA.

* USA IS THE MOST PREFERRED COUNTRY BY NRIS, FOLLOWED BY THE UAE AND THE UK

* RICH LIST ENTRANTS BORN UNDER THE ARIES ZODIAC SIGN HAD THEBEST YEAR AND REGISTERED A 55% INCREASE IN CUMULATIVE WEALTH, FOLLOWED BY THOSE UNDER THE SCORPIO SIGN AT 52%.

Mukesh Ambani, Chairman of India’s most valued firm Reliance Industries, continues to top the IIFL Wealth Hurun India Rich List 2020 for the ninth consecutive year, with a total wealth of INR 6,58,400 crore. His total wealth has surged by 73% in the last 12 months, propelling him to become the richest individual in Asia and fourth richest person in the world. 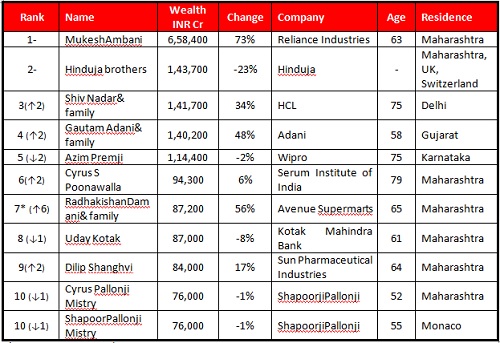 “The IIFL Wealth Hurun India Rich List is a barometer of the Indian economy, helping us understand which industries have gone up, innovated or gone down. The stories of these entrepreneurs tell the stories of India’s modern businesses.”

"28% of the upswing in wealth on the list has been bestowed by MukeshAmbani, bespeaking Ambani's meteoric success post diversifying from oil to telecom and retail. A further 21% of the additional wealth has been generated by pharma, mainly on the back of the rise in healthcare spends and a realigned priority towards personal healthcare stimulated by the Covid-19.”

“With rising new wealth creators such as innovative startups, family businesses with strong professional management, investors who believe in the India story, and a demographic advantage that is inferior to none, the India’s wealth creation story is still yet to reach the half-way mark.”

“Assuming that for every one Hurun rich lister we have found, we have probably missed two, it is likely that India today has 2,000 individuals with INR 1,000 Cr”, continued Anas Rahman Junaid, MD and Chief Researcher, Hurun India.

Speaking at the launch, Yatin Shah, Executive Director, IIFL Wealth & Asset Management said, “The IIFL Wealth Hurun India Rich List 2020, is a testament to our belief in the India growth story. Despite these unprecedented times, it is encouraging to note that the IIFL Wealth Hurun India Rich List 2020 has only grown. The sentiment among entrepreneurs and industry leaders has improved in recent months. India is witnessing multiple themes playing out simultaneously, which include rising wealth creation in Tier 2 and Tier 3 cities, change in behaviour of wealthy families with wealth preservation dominating investment decisions.”

“India is a land of entrepreneurs and we are indeed pleased that IIFL Wealth Hurun India Rich List 2020, is able to showcase not just entrepreneurship but various other facets of our nation’s wealth creators. What is even more encouraging is that while the number of wealthy in the top cities have increased, the list features entrepreneurs from 111 cities, which is a testimony of the wealth creation taking place across the country.”

The cut-off for the top 10 rose by 6% to INR 76,000 Cr this year, a 10% increase compared to the previous year. The cumulative wealth of IIFL Wealth Hurun India Rich Listers have increased by 20% compared to that of last year. 84 individuals have migrated from India and are NRIs. 19 saw their wealth double year on year.

All three of Udaan founders became the highest gainers in terms of wealth as compared to the 2019 edition – with increase of 274% in each of their wealth. Chigurupati Krishna Prasad (65), of Granules India, also registered a 218%jump in the wealthto INR 3,500 crore. With a wealth of INR 4,500 crore, Ritesh Agarwal (26) of Oyo Rooms is the youngest person on the list and with a wealth of INR 5,400 Crore, Dharam Pal Gulati (96) of MDH is the oldest on the list.

Nearly 5% of the list (40 individuals) is comprised of women. 10 out of these 40 women are self-made. The richest woman in the list is Smita V Crishna, 69, of Godrej with INR 32,400 crore, followed by Kiran Mazumdar-Shaw, 67, of Biocon with a wealth of INR 31,600 crore also the richest self-made woman in India. The average age of women on the list is 61 years.

Being home to 217 individuals that comprise 26% of the list, Mumbai is the residential capital of India’s wealthy, followed by New Delhi and Bengaluru. In the year 2020, Mumbai registered an increase of 41 individuals from the rich list, while New Delhi lost 5 of them. More than half of the new additions in IIFL Wealth Hurun India Rich List 2020 are contributed by top three cities this year - this was 36% last year.Further, with 248 and 128 entrants respectively, Maharashtra and Delhi are the preferred states of residence for individuals in IIFL Wealth Hurun India Rich List 2020.

USA, UAE & UK are the preferred countries for migration. 84 NRIs who feature in the IIFL Wealth Hurun Indian Rich List 2020. With 37 individuals, USA is the most preferred country by NRIs, followed by the UAE and the UK, which are home to 18 and 14 individuals, respectively.

The IIFL Wealth Hurun India Rich List 2020 has been researched and compiled by the Hurun Research Institute for the ninth year running, using a cut-off of 31 August 2020 when the rate of exchange to the US dollar was INR 73.67. The list relates to Indians only, defined as born or brought up in India.

The big default? The dozen countries in the danger zone