Rupee bulls dig in as investors grapple with elections across Asia: Reuters poll

A tale of two elections saw investors raise their bullish bets on the Indian rupee over the past two weeks while long positions on the Thai baht unravelled to their lowest this year, a Reuters poll showed.

Foreign investors have ploughed billions of dollars into India ahead of an election process spread over seven phases and ending only toward the end of next month with nearly 900 million people eligible to vote. The process begins on Thursday.

Investors, who only turned bullish on the rupee at the start of March for the first time in nearly a year, have since raised their long positions to their highest since January of last year, the poll of 14 respondents showed.

The prospect that Prime Minister Narendra Modi and his party will manage to just about win a parliamentary majority has sparked net inflows of over $8 billion into equities so far this year as of April 9. More than half of the inflows occurred in March alone.

On the other hand, Thailand, which is still reeling from the fallout of uncertainty surrounding its election at the end of March, has seen investors unwind some of their long positions on the baht gradually built up during the first two months of the year.

The baht, however, still remains the best performing currency so far this year among its regional peers, gaining about 2.5 percent thus far.

Final results of the Thai election will be announced on May 9.

"Two-directional risk remains high and both currencies could still move either way depending on how the election news develops over the next few weeks," said Julian Wee, a South Asia investment strategist at Credit Suisse. 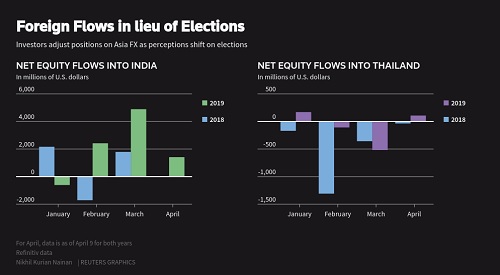 Indonesia, Southeast Asia's largest economy, also heads into elections next week with investors turning bullish on the rupiah once again after a month's hiatus.

Elsewhere, investors trimmed long positions on China's yuan to their lowest since turning bullish in January.

There has been progress towards a trade deal between China and the United States but U.S. officials say there are still important issues for the countries to address. However, the fallout from the months-long trade war has resulted in weak economic data, posing concerns for the health of the global economy.

In response, China has undertaken massive stimulus measures to reinvigorate its economy, which analysts at HSBC say will boost growth as it filters through in the coming quarters.

The poll uses estimates of net long or short positions on a scale of minus 3 to plus 3. A score of plus 3 indicates the market is significantly long U.S. dollars.

The figures include positions held through non-deliverable forwards (NDFs).

US dollar rises on risk aversionc

Rupee slumps to record low against US dollar

Airtel, Nodwin Gaming tie up for e-sports` growth in India