USDINR August futures could consolidate in the range of 79.40 to 79.90 - HDFC Securities

Forex Markets to consolidate Ahead of US Inflation Data

* Indian rupee could start slightly higher after Monday’s fall of more than half a percentage point following higher crude oil prices and stronger dollar demands. On Tuesday, the Indian forex market remained closed on account of Muharram. The forward markets indicate USDINR could open with a loss of 5-7 paise but may consolidate in a narrow range ahead of US Inflation data.

* Asian stocks fell with European futures following a retreat on Wall Street.US equities declined on Tue, following a batch of disappointing company reports and ahead of key US inflation data. It was a relatively quiet session, where the US dollar largely traded between 105.95 to 106.41 before closing at 106.37, while last it was quoted at 106.29.

* • The yield on 10-year Treasuries rose 3bp to 2.79% on Tuesday; The two-year yield at one point exceeded the 10-year by 47.5bp, the largest negative yield relationship sinceAugust 2000.

* All eyes will be on the US CPI report, coming in the American session, as markets are palpably nervous that it will yet again surprise the upside even as most investors are positioned for July inflation to ease down noticeably from June’s 9.1% annual pace. US CPI data may show a slowdown in July to 8.7%, which is still too fastfor the Fed. Month on month .

* Chinese consumer inflation in July was the fastest in two years, but it fell short of estimates. The CPI rose by 2.7% year on year, short of the 2.9% consensus, while factory-gate inflation slowed more than expected.

* USDINR August futures have resistance at the middle band of the Bollinger band, currently placed at 79.86

* It has rising trend line support around 79 odd levels.

* Long buildup has been seen with addition in open interest and gain in price.

* USDINR August futures could consolidate in the range of 79.40 to 79.90. The medium-term trend remains bullish as long as it trades above 79 levels. 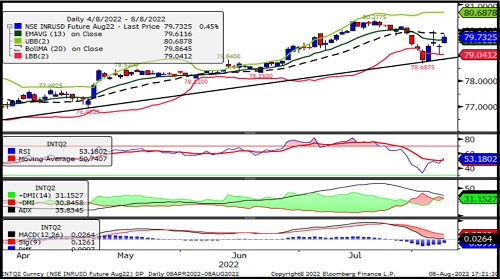