The US dollar index witnessed profit booking in October and ended lower capping consecutive gains of three-months. The dollar index declined from its almost 28-month highs near 99.66 levels to end October at 97.35, down over 2%. A sharp up move in GBP and Euro due to postponement of Brexit date till January 31, 2020 supported major currencies over US$. The Federal Reserve in its October policy meeting cuts interest rates by further 25 bps, a third rate cut in the cycle. However, the Fed also hinted at the strength of the US economy, reduced risk over US-China trade worries and declining possibility of UK’s disorderly exit from EU bloc. This has effectively ruled out immediate rate cuts from the Fed

The rupee ended October at 70.92, slightly changed as domestic worries were countered by favourable global factors like soft US$, appreciating Chinese Yuan. The Indian currency is likely to remain anchored to moves in Chinese Yuan in the backdrop of softening US$ and steady oil prices

In dollar-rupee options segment, 71.0 strike has the highest Put and Call OI. US$INR pair has near term support at 70.50 levels. We expect the pair to trade in the range of 70.50 -71.80 in the near term. Downsides in the pair should be utilised to initiate long positions

* Euro ended on a positive note registering decent gains of over 2.30%. As such, Euro ended its three month losing streak. Declining concerns over UK’s disorderly exit from the EU bloc as well as profit booking in the US$ has helped the Euro

* Eurozone HICP inflation growth witnessed a further cool-off in September. It declined to 0.8%, which is lowest since November 2016. Inflation is drifting away from ECB target of just below 2%. This is likely to see ECB continue its dovish trajectory 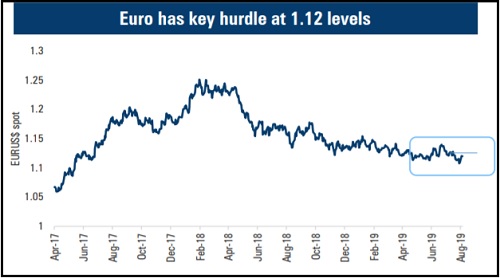 * JPY continues to hover near 108 levels. We expect it to trade in the range of 105.5–111 levels while any fallout in the US-China likely trade pact could see JPY rising towards 104 levels 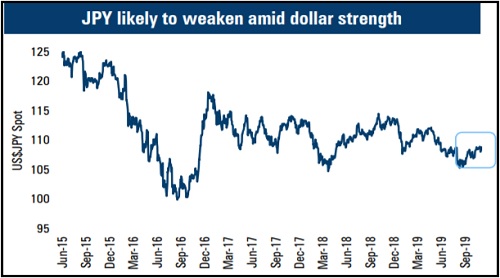 * GBPUS$ extended huge gains for a second consecutive month. It closed October at 1.294, up over staggering 5.2% as Brexit was most likely delayed till January 31, 2020 and also due to declining possibility of a “No-deal” disorderly exit of the UK from EU bloc

* CFTC data shows sharp closure in GBP net short positions. It declined from 34% of total OI in September to 15% in October

* GBP is likely to remain upbeat as imminent risk of UK crashing out of EU bloc has dissipated. We expect GBPUS$ to trade in the range of 1.26-1.33 levels in the near term. However, likely UK election outcome is a key trigger for the pair 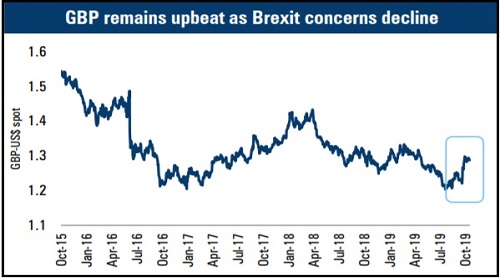