* US dollar tumbled to a near eight week low pressurised by the Brexit developments.

* Euro bounced back while UK's pound remained volatile after initial gains as EU and Britain strike a Brexit deal.

* Japan’s yen inched higher as investors wait for clarity on the prospect of a Brexit deal and a U.S.-China agreement on trade.

FIIs being buyers for a fourth consecutive day and tracking the gains in the domestic equities, the Indian currency started the day on a positive note. Weakness in American dollar amid absence of any major signals from the USSino trade negotiations and striking a Brexit deal also aided the local unit. Rupee yesterday opened at 71.38 a dollar and traded in a range of 71.14 and 71.47 before settling the day at 71.16 against its previous close of 71.43. On Wednesday, Indian unit appreciated by 11 paise.

On the global side, EU and Britain said that they have struck a deal for Brexit, which now is waited for the approval from the EU and UK parliaments. FIIs were buyers in the domestic capital market segment; bought shares worth Rs 1158.63cr while DIIs offloaded shares worth Rs 511.76cr on Thursday. Oil prices eased on weak economic data. On the domestic front, investors today will focus on the RBI minutes from its recent meeting. The central bank is also set to release its weekly FX data later in the day. 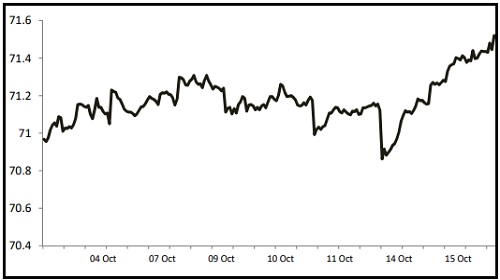 After over 2 months, hotels to reopen with `gold` standards of hygiene