* US dollar gained against a basket of currencies after Fed cut its policy rates.

* FOMC in its monetary policy meeting reduced its interest rates for a third time in a row.

* BoJ began its policy meeting yesterday and the outcome is expected today.

Ahead of US central bank policy outcome and month end American currency demand from the importers curtailed the Indian unit's upside move to end lower by 6 paise. However more downside was capped led by the foreign fund inflows and rally in domestic equities. After a weak opening, Rupee touched a low of 71.03 a dollar but bounced back to close at 70.90 against its previous close of 70.84. On the previous day, Domestic currency ended higher by 4 paise.

FIIs were buyers in the capital market segment; bought shares worth Rs 7192.42cr on 30 Oct as per exchange's provisional figures. DIIs, on the other end were sellers to the tune of Rs 185.87cr for the corresponding period. Oil prices eased after a report showed bigger than expected inventories build-up. FOMC in its policy meeting yesterday reduced its interest rates as market estimates but indicated a pause in future while BoJ is expected to deliver its decision today. On the domestic front, fiscal deficit and eight core industries are due to release. 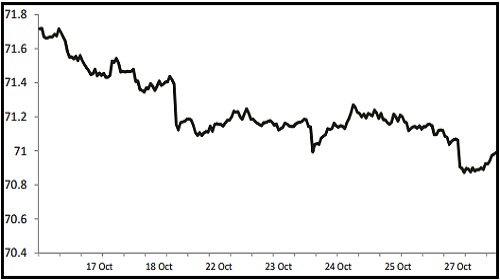