* US dollar edged higher against a basket of currencies on trade deal hopes and better economic data.

* BoE is slated to meet this Thursday for its monetary policy meeting.

* Japan's services PMI shrank for the first time in nearly three and half years.

Move by the Chinese central bank and capital inflows aided the Indian currency that continued its up move for a third straight day to close at a fresh five week high. However, weakness in domestic equities capped more upside. Indian unit yesterday opened at 70.80 a dollar and moved in a range of 70.65 and 70.81 before settling the day at 70.69 against its previous close of 70.77. On the previous day, Rupee ended higher by 4 paise.

FIIs were buyers in the capital market segment; bought shares worth Rs 473.17cr as per exchange's provisional figures on 05 Nov while DIIs offloaded shares to the tune of Rs 1593.71cr for the same period. Oil prices slipped on huge US inventories build up. China's central bank on the previous day cut a key loan rate for the first time in three years on the back of growth concerns. On the domestic front, Oct services PMI released contracted for second straight month. 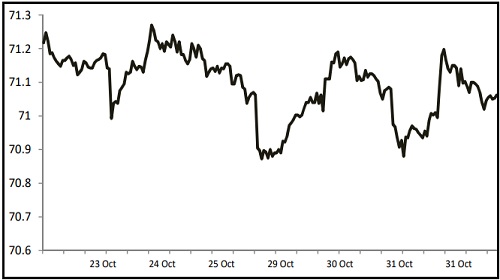