* US$INR futures started last month on a positive note by rising strongly in the first session. However, prices fell sharply around 2% in August as continued weakening of dollar weighed down by the prospect of lower US interest rates for a longer time coupled with stronger domestic equities supported by continued FII inflows kept pressure on the pair and led to rupee appreciation

* Data released by the Reserve Bank of India showed that forex reserves rose $11.9 billion in the week ended July 31, taking total reserves to $534 billion. India has seen a huge build-up of reserves in the last few months as foreign investors pumped in money into Indian equities

* US$INR futures have an immediate hurdle of 74.50 level. As long as it sustains below this level, we will see this appreciation trend continuing in the near term towards next major support around 72.30 level 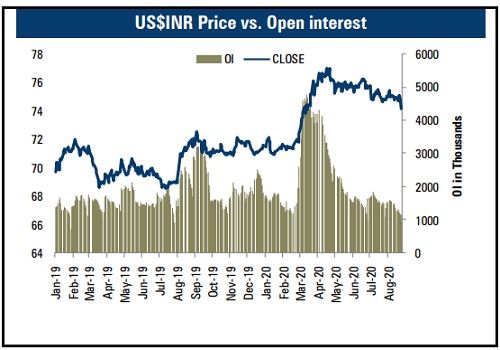 * EURINR futures corrected slightly in August after rallying strongly for three consecutive months. However, a weaker dollar continued to provide support to the pair

* The ZEW economic survey of economic sentiment rose to 71.5 from 59.3 points in the previous month, far exceeding a forecast for 58.0 in a poll

* However, a new wave of Coronavirus infections in the continent may stall the rebound in the Eurozone economy. Therefore, we expect EURINR to trade in the range of 86.50-89.50 levels 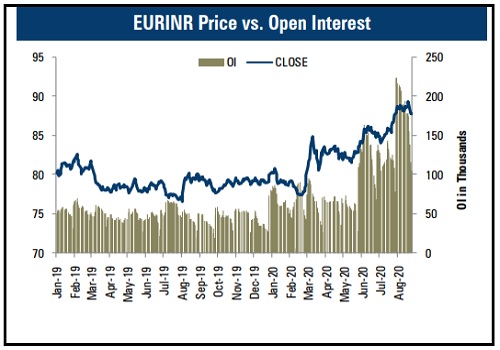 * GBPINR futures consolidated for most of the month in the range of 97.00-99.00 levels as the cable currency has largely been buoyed by a broad based weakening of dollar, as risk sentiment recovered and investors piled back into currencies perceived as riskier bets

* However, Britain and the European Union made scant progress towards a deal on future ties in talks and their chief negotiators blamed each other for the stalemate as time ticks down to an endof-year deadline

* Therefore, we believe GBPINR futures would correct from current levels towards 96 level for the short-term as a mix of Brexit uncertainty, Coronavirus fears and dismal economic data could well mean a return to a decline in sterling

* JPYINR futures fell gradually for most of the month as it was on the track of a correction. However, it bounced slightly after the news that Shinzo Abe, the nation’s longest serving Prime Minister, will step down due to worsening health

* Earlier, Japan saw its biggest economic slump on record in the second quarter due to the Coronavirus pandemic. With a 27.8% annualised contraction, the size of the economy shrank to decade-low levels

* Overall, we expect JPYINR futures to be positive for the near term as a possibility of a shift away from Abe’s expansionary economic policy will likely spur demand for the safe haven yen towards 71.50 level 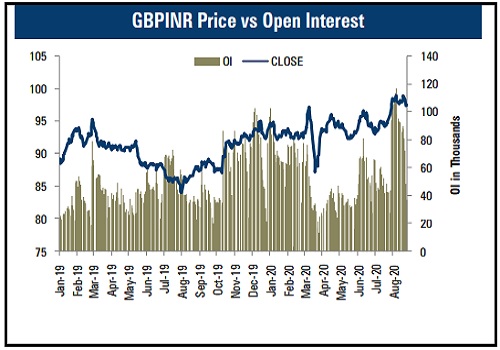 The market sentiments are hinged on to the US fiscal stimulus negotiations By Mr. Rahul Gupta, Emkay Global

Quote on Rupee By Angel Broking