Dollar on course for worst month in as decade - HDFC Securities

Dollar on course for worst month in as decade - HDFC Securities

* Indian Rupee sets for a positive start to the final trading day of the month amid overnight selling in dollar after U.S. GDP shrank the most on record in the second quarter. Dollar index on course for the worst month, after September 2010, with loss of around five percent.

* On Thursday, rupee closed at 74.85 a dollar, erased previous day gain. The bias for the rupee remains bullish amid weaker broad dollar.

* US Federal Reserve Bank credit (i.e. the sum total of interest-bearing assets at the Fed) edged higher to $6.92 trillion, $4 billion above last week’s reading. The Bureau of Economic Analysis announced that second quarter GDP fell to an annualized $19.4 trillion from $21.6 trillion in the first quarter. That diminished denominator increases the ratio of Reserve Bank credit to 36% of GDP, while total public debt outstanding now foots to 137% of output.

* The rally in euro continued overnight, but it probably could use a rest based on its premium to its 20-day moving average. It’s swelled to 3% from essentially zero at the beginning of July. That kind of premium is rather rare and makes the risk of a jarring pullback from any hint of ECB intervention or political jawboning that much more likely.

* Donald Trump on Thursday tweeted about the possibility of delaying the November elections, suggesting they be put off “until people can properly, securely and safely vote.” He also intimated that any attempt to replace in-person polling stations with mail-in voting would lead to fraud.

* The pair is having recent bottom support of 74.80, coincidentally it is 200 days moving average.

* However, the gains could be limited up to 75.50 We could see higher level selling amid bearish chart sequence of lower top lower bottom on daily chart. 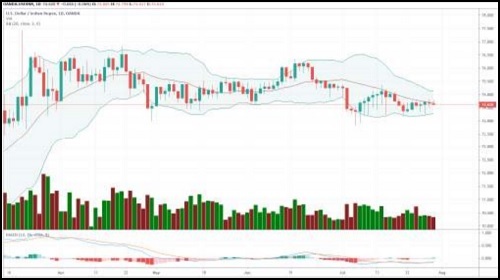 This week dollar bulls have been very active by Rahul Gupta, Emkay Global

After a sharp fall in the USDINR spot by Rahul Gupta, Emkay Global

The sharp fall in USDINR spot has been very unexpected and traders are in shock - Mr. Rahul Gupta, Emkay Global

The range bond movement in USDINR has continued even this week by Rahul Gupta, Emkay Global

This week the fall in dollar index and positive stock indices by Rahul Gupta, Emkay Global

This USDINR pair needs a trigger to decide the trend by Rahul Gupta, Emkay Global