Asian Currencies Steady Ahead Of US Economic Data - HDFC Securities

Asian Currencies Steady Ahead of US Economic Data - HDFC Securities

* Asian currencies are changed ahead of U.S. retail sales and industrial production data later in the day that may signal how aggressive the Federal Reserve could be in cutting rates. A gauge of regional stocks fell for the first time in five days while bonds were mostly higher.

*  India’s first issue of overseas sovereign bonds may be around $3-$4 billion with a maturity of 20 years.

*  Foreign fund remained net seller in domestic equity market since start of the month as govt. levied surcharge on FPI.

* Treasury Secretary Steven Mnuchin and House Speaker Nancy Pelosi are hashing out details of a debt limit deal that both sides say should include an agreement on a two-year budget deal.

*  The pound hit a two-year low against the dollar this month and has suffered a record run of weekly losses versus the euro. Seasonal patterns show it has fallen against the greenback for the past five years in August and against the common currency for four of those 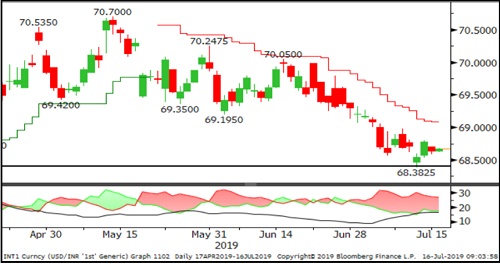 Momentum indicators are showing sign of positivity indicating near term short covering. However, the trend remains bearish until it closes above 69.20