MCX Lead futures traded sideways to bullish during the last month June owing to easing lockdown situation worldwide, which led to reopening of almost all industries. This also led to increase of demand for Lead in the global markets, However, major uptrend had also been limited due to worries of second wave of covid-19 especially in United States, Latin American Countries and China. By 2nd July, MCX Lead prices closed at Rs.143.15/kg, higher by 8.24% compared to closing of Rs. 132.25/kg reported on 29th May.

Looking forward for the coming month, we expect MCX Lead futures to trade sideways to bullish with positive cues about further reopening of the global markets after the lockdown. Global Usage which had been lagging behind in the previous months, butis also forecasted to increase in the months ahead. As per International Lead and Zinc study Group (ILZSG), global refined lead production for the month of Apr’20 has reported at 943 thousand metric tonnes(MT), higher by 5.76% compared to previous month's production of 891.6 thousand metric tonnes. On the other hand, metal usage during Apr'20 has been reported at 913.4 thousand tonnes, higher by 1.59% compared to previous month's usage of 899.1 thousand tonnes. Mining activities in South America has picked up additional pace with further easing lockdown situation especially in Chile, Peru, Mexico countries with a working capacity of more that 80%. However, the trade surplus for Apr’20 has been reported which is likely to limit major uptrend in prices during the coming weeks. Hence, we expect mixed to bullish trend in MCX Lead futures for the month ahead. 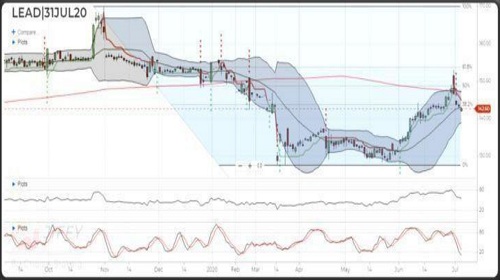 On the daily chart, MCX Lead (July) has witnessed resistance near its “61.8% Fibonacci Retracement Level”, which indicates weakness in the counter. Also, the price has closed below the 200 days “Simple Moving Average” which indicates power in the hands of the bears. Furthermore, price has breached below the “Bollinger Band Mean” which signals bearish strength. Additionally, momentum indicator Stochastic (6) has shown a negative crossover, which confirms bearish dominance in the counter. Also, the counter’s Super Trend (7,1) indicator has given a sell signal which confirms bearishness. So, based on the above technical structure one can initiate a short position in MCX Lead (July) future at CMP 142.90 or a rise in the prices till 144.15 levels can be used as a selling opportunity for the target of 134, However, the bearish view will be negated if MCX Lead (July) closes above the resistance of 148