yesterday settled up by 0.69% at 49900 after a federal report cut forecasts for global and U.S. production. In its monthly supply-demand report, the United States Department of Agriculture (USDA) cut its global production forecast by 3.1 million bales, and the U.S. output outlook by 3 million bales for the 2022-23 crop year. Hot and dry weather conditions in key growing areas in the United States have threatened the condition of the natural fiber crop and raised supply concerns. The USDA's lower global output estimates also reflected a reduction of about 100,000 bales "as extreme heat in Uzbekistan reduced yield prospects there." However, the agency said it expects the lower U.S. production projections to result in a 2 million bale reduction in exports compared with July, and a 200,000 bale dip in mill use. India’s Cotton sowing gained by nearly 5.34% to 117.65 lakh hectares in 2022 against an area sown of 111.69 lakh hectares in 2021. In Gujarat Cotton sowing grows by nearly 13% with 2,528,354.00 hectares against sown area of 2021 which was 2,240,765.00 hectares as of now. In Rajasthan, Cotton sowing witnessed a gain of 7.99% with 647.1 thousand hectares as against 599.22 thousand hectares on the same day last year. However, crop has been damaged as excessive rains continue to hit parts of the Maharashtra State. In spot market, Cotton gained by 360 Rupees to end at 47670 Rupees.Technically market is under short covering as market has witnessed drop in open interest by -5.78% to settled at 1011 while prices up 340 rupees, now Cotton is getting support at 49490 and below same could see a test of 49090 levels, and resistance is now likely to be seen at 50420, a move above could see prices testing 5095 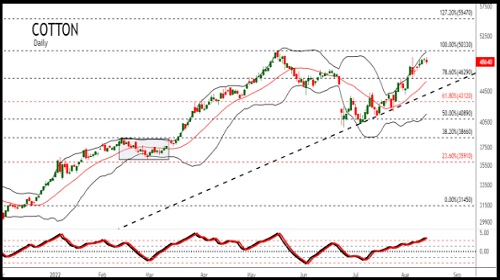 Trading Idea for the day:

Cotton rallied after a federal report cut forecasts for global and U.S. production.

yesterday settled up by 1.51% at 2829 as available stock is estimated to be very limited, the quality of which is also very weak. Support also seen after reports that there is a forecast of damage due to heavy rains after sowing of cotton in Vidarbha and Khandesh parts of Maharashtra. Sporadic arrivals of new cotton have already started in Haryana and Punjab, while the arrival of new cotton will start in Khandesh at the end of August and in Madhya Pradesh in September. All India Mandi arrivals of Kapas fell by around 82% on M-o-M basis; they were also lower by around 19% on Y-o-Y basis. Gujarat is a major producer of cotton across the country and reports of increase in sowing of cotton by at least 20% in Gujarat are coming. As per CAI, total cotton supply till end of the cotton season 2021-22 is estimated at 402.16 lakh bales of 170 kg each, lower by around 18% as compared to 488 lakh bales last year. Cocudakl’s stock in NCDEX warehouse reduced from 21 lakh sacks to 7.50 lakh sacks. 60 to 70% of Cocudakl’s stock in Gujarat is estimated to be weak quality stock. At present, only 15% of crushing mills are operational in Gujarat as the demand Khali has come down drastically due to high prices and availability of grass fodder. In Akola spot market, Cocudakl gained by 2103.35 Rupees to end at 2900 Rupees per 100 kgs.Technically market is under fresh buying as market has witnessed gain in open interest by 2.23% to settled at 43050 while prices up 42 rupees, now Cocudakl is getting support at 2761 and below same could see a test of 2694 levels, and resistance is now likely to be seen at 2865, a move above could see prices testing 2902. 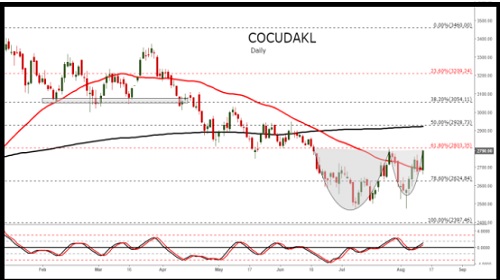 Trading Idea for the day :

Cocudakl prices seen supported as available stock is estimated to be very limited, the quality of which is also very weak.

Global cottonseed production is projected at 44.1 million tons, up 3 percent

Vishnu Kaushal discusses his character in `Feels Like Home 2`