* Jeera futures on NCDEX posted gains for the fifth straight session on Wednesday. However, the broad sentiments stayed weak on increase in arrivals in the spot market and on concerns over demand.

* Coriander June futures on NCDEX slipped on Wednesday on rise in arrivals in the spot market and tepid demand .

* Turmeric June futures on NCDEX came under profit booking on Wednesday after hitting three week high in the previous session.

* Cardamom June futures on MCX was not traded on Wednesday while the July futures on the bourse slipped nearly three per cent. Prospects of better output in the upcoming season weighed on overall market sentiments.

* Small cardamom auctions in Puttady, another e-auction centre in Kerala, will resume from Thursday, the board said in a circular on Monday. The board will hold one auction at this centre on alternate days between 1030 IST to 1600 IST till it gets approval to conduct two auctions daily. 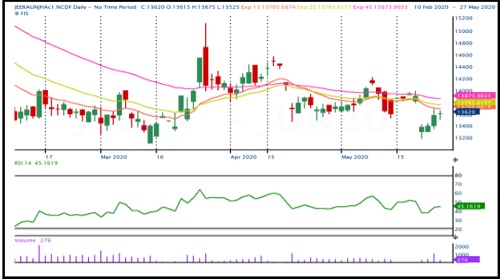 * All the commodities under oil seed basket extended its gains on Thursday.

* MCX May CPO futures traded higher on back of rise in local demand in many parts as relaxations in lockdown across India hasten buying in many hotels and restaurants along with gains in BMD Malaysian palm oil prices. NCDEX June Soy oil futures also traded higher due to bulk demand in the spot markets.

* NCDEX June Soybean futures settled the day in green due to lower stocks amid lean season along with strength I benchmark U.S CBOT soybean prices as spurring tensions between the U.S and China. June Mustard seed continued to trade higher on improved pace of mustard procurement by state agencies like NAFED at MSP along with lower supply.

* Crushing operations of mustard seeds in India fell by 28% to 650,000 tn in April compared from the same period last year at 900,000 tn according Mustard Oil Producers Association of India.

* The US Department of Agriculture has pegged global oilseed production in 2020-21 at 605.9 mln tn, compared with its estimate of 575.2 mln tn for 2019-20, primarily due to higher soybean production in its report for May. The report has pegged global soybean output 26.6 mln tn higher on year at 362.8 mln tn. For Brazil, soybean output is seen rising by 7.0 mln tn to 131.0 mln tn. Production of the oilseed in the US, is also seen rising by 15.5 mln tn to 112.3 mln tn. In Argentina, another key grower, soybean output is expected to be 2.5 mln tn higher at 53.5 mln tn. Global production of high-oil content seeds is projected up 3% from 2019- 20 on increased canola production for Canada, Australia, and Ukraine, and higher sunflower seed production for Argentina and Ukraine. Partly offsetting is lower sunflower seed production for Turkey. Demand for protein meal from China is also seen higher on year in 2020-21. Global protein meal consumption outside of China is projected to increase 2% in 2020-21, down from the prior five-year average of 3% due to the slowing global economy. Given the higher demand for protein meal, global soybean exports are expected to increase by 8.0 mln tn to 161.9 mln tn during the period. Of these stocks, China is seen buying the largest share at 96.0 mln tn. 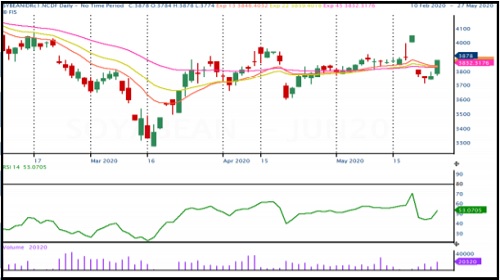 * The International Cotton Advisory Committee has revised downward its 2019-20 (Aug-Jul) forecast for global prices due to a sharp fall in consumption as containment measures for COVID-19 have shut business activity, in its May report. With the opening stock of 18.6 mln tn for 2019-20 season, global supply of cotton is projected at 44.9 mln tn. The committee has scaled down its global cotton consumption to 22.9 mln tn, from 24.6 mln tn projected in the previous month.Global export is projected to fall 11% to 8.3 mln tn, compared with 9.3 mln tn estimated a month ago. Ending stock for the current season is seen at 21.9 mln tn, higher than 19.7 mln tn projected a month ago.For India, the committee sees consumption declining 4.75 mln tn in 2019-20 season, from 5.13 mln tn estimated in the previous month. Cotton output in India is estimated at 6.2 mln tn, higher from 6.0 mln tn estimated in April.

* UK-based Cotton Outlook has revised downward its global cotton consumption estimate for 2019-20 (AugJul) to 22.5 mln tn from 23.2 mln tn projected last month as a slump in business activity in wake of the ongoing COVID-19 crisis has led to a sharp fall in demand. 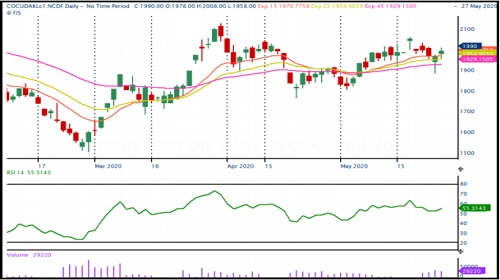 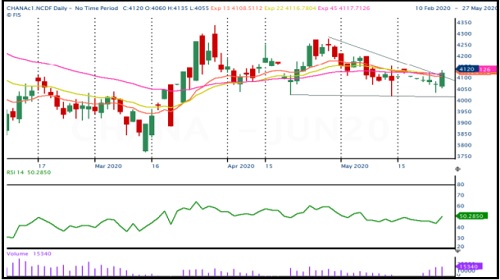