• Jeera March futures on NCDEX inched up on Monday, though it was seen mostly trading in narrow ranges. Steady demand lend support.

• According to Gujarat's farm department, as of 28 Dec2020, jeera has been sown across 464469 hectares in state, compared to 435657 hectares sown during the same period last year.

• Coriander production in Gujarat is expected to rise 55 per cent to 216680 tonnes in 2020-21 season (Jul-Jun) due to sharp rise in acreage according to the state’s farm department’s second advance estimates.

• As of Dec 28, 2020 coriander has been sown across 135563 hectares compared to 76904 hectares sown during the same period last year showed the data from the Gujarat state farm department.

• According to Spices Board of India data, coriander exports for the Apr-Sep period this year is seen at 26750 tonnes, up by nine per cent on yoy basis.

• Coriander exports from India were up 3% on year at 50,250 tn in the last financial year according to the Spices Board.

• Spices Board pegs turmeric export from India for the period Apr-Sep this year at 99000 tonnes, up by 42 per cent year on.

• Production of cardamom in 2020-21 season is seen rising by about 78 per cent to 20000 tonnes according to a Spices Board official. 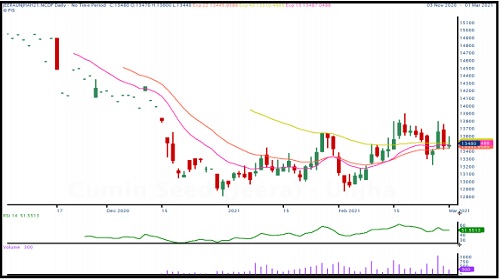 • India's oilmeal exports jumped 194% on year to 498,060 tn in January, according to data released by The Solvent Extractors' Association of India. For Apr-Jan, overall exports of oilmeal recovered and provisionally came in at nearly 3.0 mln tn, up 39% from the year-ago period.

• India's mustard output in the current crop year is likely to rise 15% to a record high of 8.4 mln tn, as per the median of estimates of 14 market participants, primarily due to higher yield and favourable weather conditions.

• India is likely to produce around 10 mln tn of mustard in 2020-21 (Jul-Jun), up 35% from a year ago, due to higher acreage and favourable weather conditions, according to the Solvent Extractors' Association of India.

• The government has proposed agriculture infrastructure and development cess on key edible oils in the Union Budget for 2021-22 (Apr-Mar). In the case of crude palm oil, the cess would lead to rise in overall effective duty by 5.5 percentage points to 35.75%. No major changes is seen in effective crude soyoil duty and crude sunflower oil.

• As on Dec 31, farmers, processors, stockists and state-run agencies had around 400,000 tn stock, compared with nearly 1.2 mln tn a year ago, according to Mustard Oil Producers Association of India.

• India is likely to grow a record 10 mln tn mustard crop in 2020-21 (Jul-Jun), mainly due to the likelihood of a sharp rise in acreage, according to Solvent Extractors' Association of India. The government has targeted an alltime high crop of 12.5 mln tn for this rabi season. The government has fixed the minimum support price at 4,650 rupees per 100 kg for 2020-21 (Apr-Mar) marketing season against 4,425 rupees per 100 kg the previous year.

• India's castor oil exports jumped 41.6% on year to 53,007 tn in September, according to data from Solvent Extractors' Association of India. The exports have surged 28% from 41,408 tn in August. India's castor meal exports plunged by 26% on year to 54,885 tn in October from 73,832 tonnes, according to data released by The Solvent Extractors' Association of India. Moreover, overall export of oil meals during Apr-Oct plunged 43% on year to 382,238 tn.

• Malaysia's palm oil exports in February are estimated to have fallen 8.2% on month to 1.0 mln tn, according to cargo surveyor AmSpec Agri Malaysia. 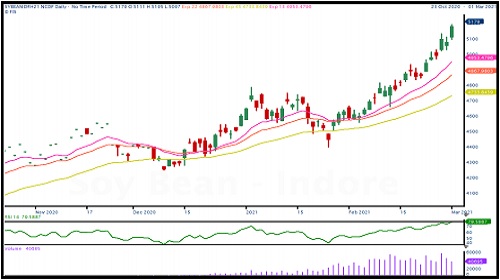 • The USDA has cut its estimate for India's 2020-21 (Aug-Jul) cotton output to 28.9 mln bales (1 US bale = 218 kg) due to lower yields. It had pegged the output at 29.5 mln bales in December. The impact of excess Northeast monsoon rains and increasing incidence of pest infestation will likely negatively impact yields, especially in the state of Telangana said in its January report. Cotton consumption in the current season is seen at 23.6 mln bales, against 23.0 mln bales projected in the previous month. Strong export demand for cotton yarn and lower prices of the fibre in the domestic market led to rise in consumption. The agency has raised its export estimate to 5.0 mln bales, compared with 4.8 mln bales a month ago. Imports are seen steady at 1.0 mln bales. In 2020-21, the closing stock of cotton for the country has been pegged at 18.9 mln bales in January, compared with 20.4 mln bales projected in December.

• The International Cotton Advisory Committee has raised its forecast for global prices in 2020-21 (Aug-Jul) due to lower production estimate and firm demand in its February report. They revised upwards its price forecast for Cotlook A index, a global benchmark for prices of raw cotton, by 4 cents from the previous month to 73 cents per pound. Global production for the ongoing season is currently estimated at 24.1 mln tn, down 8% from the previous season. The fall in output estimate has largely been attributed to a smaller crop in the US, Brazil, and Pakistan. Production in India is expected at 6.20 mln tn, compared with 6.07 mln tn in the previous year. The committee has estimated global consumption at 24.1 mln tn, compared with 22.8 mln tn last year. Similarly, global exports are seen higher at 9.3 mln tn, compared with 9.0 mln tn year ago. Global ending stock is estimated at 21.2 mln tn for the current season.

• In the Union Budget for 2021-22 (Apr-Mar), Finance Minister Nirmala Sitharaman proposed customs duty of 5% on cotton and 10% on cotton waste. She also proposed an Agriculture Infrastructure and Development Cess of 5% on cotton, taking the overall customs duty to 10%. Customs duty on raw silk and silk yarn or yarn spun from silk waste has been increased to 15% from 10% earlier.

• The UK-based Cotton Outlook has marginally raised its estimate for global output in 2020-21 (Aug-Jul) by 32,000 tn to 24.02 mln tn in its January report. The estimate has been scaled up largely due to upward revision in production in China. A slight reduction in production is seen in the US. The agency has maintained its estimate for India's cotton crop at 6.2 mln tn for the ongoing season. Production in the US is seen at 3.3 mln tn, against 3.5 mln tn projected a month ago. Global cotton consumption in 2020-21 is seen at 24.5 mln tn, against 24.3 mln tn projected the previous month. Consumption is seen higher on likely rise in demand from India and Turkey. Ending stocks of the fibre for 2020-21 are seen at 466,000 tn, against 325,000 tn projected last month.

• Cotton yarn prices in India have risen sharply mainly due to improved demand from the domestic downstream segments as well as continued strong overseas demand during Oct-Dec, rating agency ICRA said in a release.

• Cotton production in Gujarat is likely to fall 14% to 7.4 mln bales in 2020-21 (Jul-Jun) due to a sharp decline in acreage, according to the state farm department's second advance estimate. Cotton acreage in Gujarat is at 2.28 mln ha in the current season against 2.65 mln ha last year. The decline in acreage is mainly due to the shift to other lucrative crops like groundnut.

• Global cotton prices will likely average higher on a year-on-year basis in 2021 amid a broader and deeper economic recovery, Fitch Solutions says in a note. It is forecasting cotton prices to average 70c a pound in 2021. Lower global supply in 2020/21 coupled with the sharp uptick in China's import demand will keep prices supported.

• The much awaited and long delayed export agreement between Cotton Corp of India and Bangladesh government is now in its final stage and may materialise by December, said Pradeep Agarwal, chairman and managing director of the organisation. 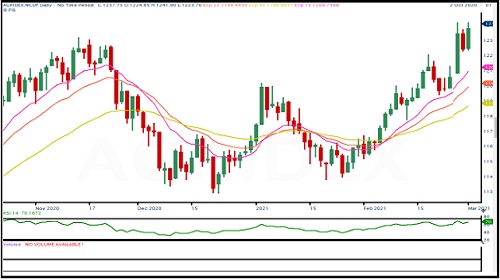 • Chana March futures on NCDEX climbed to three months high on Monday. Amidst expectation of rise in festival demand, concerns over standing crop lifted the sentiments.

• The farm ministry has approved the procurement of 61000 tonnes of chana from Maharashtra in 2021-21 under the price support scheme according to the NAFED.

• The farm ministry has approved the procurement of 51325 tonnes of chana from Telangana in 2021-21 under the price support scheme according to the NAFED.

• Chana procurement in Gujarat under the price support scheme is seen at 300000 tons for the 2021-2022 rabi marketing season.

• The farm ministry has approved the procurement of 167000 tonnes of chana from Karnataka in 2021-21 under the price support scheme according to the NAFED.

• The center is expected to purchase about 600000 tons of Chana harvested in 2020-21 under the price support scheme from the farmers in Madhya Pradesh.

• Farmers in the country have sown rabi chana across 11.2 million hectares so far, up 4.4 per cent compared to same period last year , farm ministry data showed.

• Natural rubber was under pressure in the Indian market on Monday. Decline in natural rubber prices in the overseas market weighed on the sentiments. However, ongoing lean season, firm crude oil prices and steady demand may lend support.

• Kerala government is set to raise the guarantee price for RSS4 grade rubber under Rubber Production Incentive Scheme from existing Rs.150 a kg to Rs.170 a kg with effective from April 1, 2021 as per the state budget presented on Jan 15, 2021. 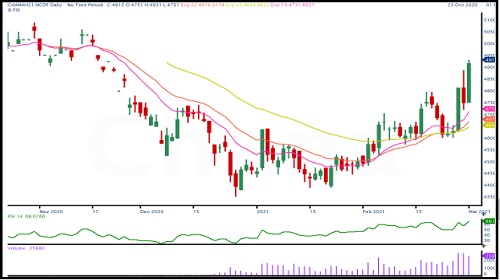 Views express by all participants are for information & academic purpose only. Kindly read disclaimer before referring below views. Click Here For Disclaimer.

Seamec gains on the bourses

Wonderla Holidays jumps on the BSE