* Incorporated in 1946, India cements is amongst India's leading manufacturers and supplier of cement and rated as one of the best cement companies in India. It has robustly grown in the last two decades to a total capacity of 15.5 mn tons per annum. It now has 8 integrated cement plants in Tamil Nadu, Telangana, Andhra Pradesh and Rajasthan and two grinding units, one each in Tamil Nadu and Maharashtra. While retaining cement over the years, the company has ventured into shipping, captive power and coal mining.

* India cements reported its Q1FY21 numbers wherein its revenue was down by 48.5% YoY to Rs 757 cr, due to muted demand and decline in volumes. The fall in EBITDA was restricted by cost saving measures as well as higher realizations, however it EBIDTA de-grew by 35% YoY at Rs 159 cr. Its net profit declined by 76.5% YoY to Rs 17 cr. Further, management expects gradual pickup in demand in Andhra Pradesh and Telangana on the back of government initiatives.

* Though there are near term challenges with respect to COVID led uncertainty and weak volume trend. However going forward, we remain positive on the company as its growth would be driven by anticipated revival in demand, improving product mix to boost realization, cost saving initiatives and the management’s focus on reducing debt.

* India Cement had a prolonged downtrend for nearly six years and it retraced from the record high of 332.60 to 43.05 in 2013, followed by consolidation.

* It formed a distorted Head and Shoulder pattern (which is bullish reversal pattern in nature) on the monthly chart during that consolidation phase and witnessed breakout from the same in August 2016. It surged strongly thereafter and doubled i.e. roughly 100 to 215 levels in the next three quarters. However, it couldn’t sustain at those levels and witnessed a gradual decline and again reached to double-digit mark in the next two years.

* It recovered sharply in February 2020 from the low of roughly 70 levels, after spending nearly six months in a range. And, after testing the hurdle around 140 levels, it has been witnessing profit taking for the last two months and currently hovering around the support zone of the medium-term moving average (100 EMA) on the daily chart. Indications are in the favor of marginal consolidation around the current levels, followed by a strong rebound. Traders shouldn’t miss this opportunity and accumulate gradually, by buying at CMP (116.85) and adding more on dips around 109. We recommend maintaining closing stop loss at 98 for the upside potential for 155 levels. 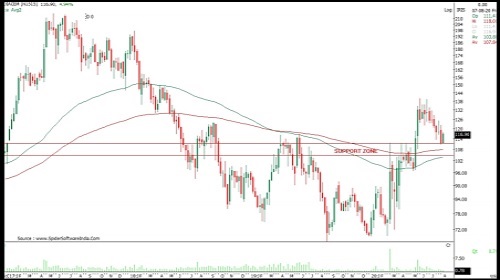 We don`t force ourselves to invest if opportunities aren`t available: Neil Parag Parikh

DGCA to SC: Tickets booked before, during lockdown refundable