* Consumer staples stocks, after the sharp up move in March-April, have witnessed a healthy base formation in the last six months at the long term support area and are expected to resume their fresh up move

* The share price of Hindustan Unilever has formed a higher base at the long term demand line joining major lows since October 2018 and the rising 52 weeks EMA (currently at | 2094), thus offering a fresh entry opportunity with a favourable risk reward set-up

* During the current week’s trade, the stock has generated a breakout above the falling supply line joining highs of April (| 2614) and July (| 2350) signalling the current consolidation is approaching maturity and resumption of fresh up move

* The stock has already taken 28 weeks to retrace just 80% of the previous four week’s up move (| 1758-2614). A slower retracement highlights a robust price structure and higher base formation 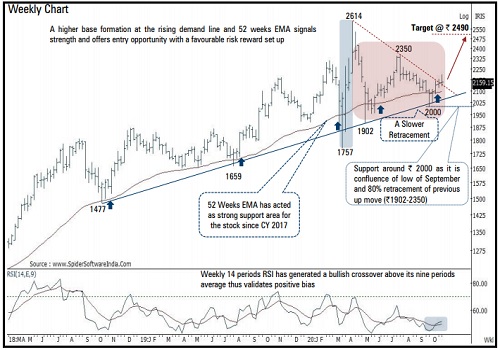 Bajaj Finance (BAJFI): Base formation at 52 week’s EMA has set stage for next leg of up move with favourable risk reward

* The financial space has already seen rejuvenation of upward momentum over the past few weeks. We expect catch up activity to be seen in Bajaj Finance in the coming weeks

* Weekly MACD has been sustaining above its zero line and is currently converging towards its nine period’s average, indicating at impending acceleration of upward momentum 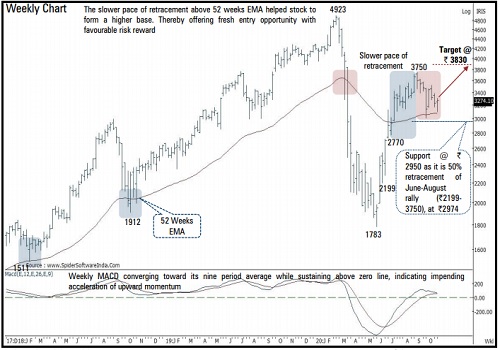