Apart from the Honda Jazz, every other premium hatchback crossed the 100 unit sales figure

The premium hatchback segment has now got a new contender in the form of the Tata Altroz. It goes up against the segment leaders such as the Maruti Baleno and Hyundai Elite i20. Let’s see how each premium hatchback performed in January 2020 sales: 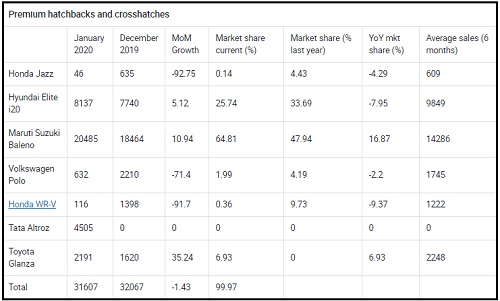 Maruti Baleno: When it comes to the premium hatchback segment, the Baleno continues to be the preferred choice. This is evident as it still holds the highest market share of almost 65 per cent.

Hyundai Elite i20: The Hyundai Elite i20 took the second spot on the January sales chart. Its month-on-month (MoM) figures went up by more than 5 per cent while its market share went down from over 30 per cent to around 25 per cent when compared to the previous year.

Tata Altroz: Tata entered the premium hatchback segment with the Altroz. The carmaker has already shipped over 4500 units of the Altroz, helping it grab third spot on the sales chart.

Toyota Glanza: Toyota shipped 2000-odd units of the Baleno-based Glanza in January. The Glanza’s MoM figures witnessed the maximum growth among all the offerings in the segment. It now commands a market share of almost 7 per cent.

Volkswagen Polo: The Polo’s sales figures failed to cross even the 1000-unit mark in January. Its year-on-year (YoY) market share has dropped by 2.2 per cent.

Honda WR-V: One of the two Honda offerings in the segment, the WR-V is the second least sought-after premium hatchback. Its MoM figures have gone down by almost 92 per cent. It now has a market share of just 0.36 per cent.

Honda Jazz: Honda failed to ship even 50 units of the Jazz, making it the least popular premium hatchback. The MoM figures of the Jazz have dipped by almost 93 per cent, which is the worst in the segment. It has the least market share of 0.14 per cent.

Unsold BS4 Hero Bikes Will Be Taken Back By The Company

Clash Of Segments: 2018 Maruti Ciaz vs Vitara Brezza - Which Car To Buy?

Colorful shoes for a vibrant you

Residents take coronavirus surveillance into their own hands